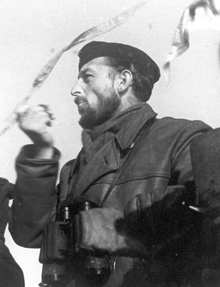 
Jürgen Oesten joined the Reichsmarine in April 1933. Following standard training he spent more than a year on the battleships Admiral Graf Spee and Karlsruhe. In May 1937 he transferred to the U-boat arm, receiving a thorough pre-war training. In October 1937 he became a Watch Officer on U-20.

On 12 August 1939 he commissioned the small type IIC U-boat U-61. The first patrol, after two months of training, was during the last days of October 1939. One ship was sunk by a mine laid by U-61 in 1939, and over the next seven patrols Oesten torpedoed five more, to bring the total tonnage up to 20,754 GRT.

After his eighth patrol he left U-61, and one month later commissioned the much larger type IXB U-106.

On her maiden patrol from Germany to her new base at Lorient, U-106 sank two ships with a total of 13,640 tons. Kptlt.Oesten received his Knights Cross on her second patrol in African waters, where he sank eight ships totalling 44,820 tons. His attack on one vessel during the battle against convoy SL 68 was unintended but effective: he aimed at the shadow of a 'merchant ship' in bad light conditions and did not realise that the torpedo had hit and damaged the the British battleship HMS Malaya.

Kptlt. Oesten left U-106 in October 1941 to become commander of the 9th Flotilla at Brest in France.

In March 1942 Jürgen Oesten became U-Boot-Admiralstabsoffizier with FdU Nordmeer (Commander of U-boats Northern Waters). In July 1943 he left Norway and on 2 September, 1943 commissioned the type IXD2 U-861.

U-861 left Kiel on 20 April 1944 for the Far East as a Monsun boat, but she first operated in Brazilian waters, sinking two ships. The boat found her next victim south of Madagascar, and before she reached Penang on 23 September, 1944 she sank another ship off Somalia. The voyage took five months.

U-861 left Surabaya, Indonesia on 15 January 1945 with a load of vital goods and only two torpedoes for self-defence. On the return journey the boat struck an iceberg south of Greenland, but Oesten, through good luck and seamanship, reached Trondheim, Norway on 19 April, 1945 with only five barrels of fuel remaining in the tanks.

According to his family he died peacefully on 5 Aug 2010. He was apparently buried at sea after a service at a chapel in Hamburg-Ohlsdorf.