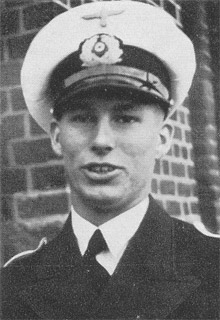 Erwin Rostin began his naval career in October 1932. After serving on the WWI battleship Schlesien, he commanded the minesweepers M-98 and M-21 1940-41. In March 1941 he transferred to the U-boat force. Following standard training, but without any previous combat experience, he commissioned the large type IXC U-boat U-158 on 25 Sep 1941. After four months of working up the boat and crew, he took U-158 out for the first war patrol, off the US east coast, during which he sank five ships with a total of over 38,000 tons.

One month after her return, U-158 left for the second war patrol, this time in the Gulf of Mexico, on 4 May 1942. This turned out to be one of the most successful patrols of the war in terms of tonnage, with 12 ships totalling 62,536 tons sunk. Its outcome was not successful for the boat and her crew, however. U-158 was sunk by depth charges from a US aircraft on 30 June 1942 and went down with all hands (Niestlé, 1998). Kptlt. Rostin had been awarded the Knights Cross via radio two days before his death.