Next to code breaking and radar HF/DF (known as "Huff Duff" to the sailors) was probably the most dangerous allied technology facing the U-boats.

The technology was not new, as it had been used to find bearings on medium and low frequencies for navigation purposes for years. The Royal Navy, however, was the first to design an apparatus that could take bearings on the high frequency radio transmitters employed by the German U-boats.

Numerous shore-based installations were constructed on both sides of the Atlantic and also in Iceland, Greenland and Bermuda. When the U-boats reported home, whether it was weather, status reporting or convoy contact, the HF/DF could get bearings on the approximate position of the boat. This was very vague however but proved useful against a concentration of U-boats or wolfpacks waiting for a convoy. Then the convoy could be instructed to evade the U-boats. Thus it was not necessarily important to understand what the U-boat was saying, it was enough that he was in that specific area and it would be wise to avoid it. 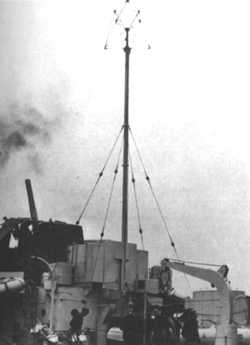 In 1942 the allies began to install HF/DF equipment on ships and after that the escorts could get a much more accurate fix on the transmitting U-boats. The U-boats in question would often be a mere miles from the convoy, yet perhaps out of radar range (these early radar sets were somewhat prone to failures). If two or more escorts had HF/DF contact they could get the U-boat's position quite accurately, at least good enough to considerably reducing the area needed to search.

The HF/DF proved highly successful against the shadowing U-boat (U-boats that located a convoy were normally told to shadow it and on regular intervals radio homing signals for other U-boats). It was this signal the escorts could systematically track down and then attack the U-boat responsible. Often this was enough to sink the U-boat or cause it loose contact with the convoy (the convoy often made evasive maneuvers at the same time as the U-boat was forced to dive for hours).

Thus the system struck at the very core of the wolfpacks tactics, namely the communications needed to gather the group into position. Had the U-boats operated under more strict radio silence the wolfpacks would have been a lot harder to form.

After 1942 dozens of U-boats were sunk shortly afterwards being fixed after transmitting a radio message home. Many commanders went to great lengths to try to avoid this like running at high speed for hours in the wrong direction and then transmitting and then hurrying back before the escorts or aircraft would start scouting the suspected area.

Failing to implement a severe radio silence after 1942 was one of the greatest mistakes the German U-boat command ever did.