On 24 May 1941, a British Research panel held its first meeting. Chaired by Mr. Ivor Bowen, Assistant Director of Armament Research, it had to study "Methods of Attacking Armoured Fighting Vehicles". This was a reaction to bad experiences in North Africa, where aircraft had much difficulty to destroy heavy German tanks. The panel came to the conclusion that rocket projectiles (officially called UP, Unrotated Projectile) held some promise, because they could carry a heavy warhead at adequate speed, without recoil. It was known that the Russians were using rocket projectiles, and when asked for information, the Russians arranged for a demonstration on 12 August. On this occasion the representative of the RAF was told that the weapon was very effective, and the Russians even offered to sent a technical mission to assist the British development, but later whitdrew the offer.

Although cordite-fueled rockets were in development in Britain since 1934, at the Woolwich Arsenal, development was slow. Both 2in (50.8mm) and 3in (76.2mm) rockets were constructed, with alternative high-explosive and solid armour-penetrating warheads. Tests were conducted on improvised shooting ranges, because the Treasure refused to fund a suitable one! The first UP was fired on 25 October 1941. The 3in rocket consisted of an 4ft long steel tube, filled with cordite propellant, and fitted with four fins. The rocket reached a speed of 1520 ft/sec at 1000 ft (460 m/s at 300 m), and 1740 ft/sec at 3000 ft (530 m/s at 915m). Deliveries started in late 1942. Most aircraft carried four under each wing, and either a pair, or a salvo could be fired. Tests revealed that the rocket was very accurate, but of course careful aiming was required. It had a tendency to ricochet, so it was common to aim low. The 25lb (11.3kg) solid armour-piercing warhead had an armour penetrating of about 4in, and proved useless against the Tiger tank; but the 60lb (27.3kg) high explosive warhead could blow a turret of a tank. The armour-piercing warhead would prove useful against U-boats, however. (In reality the rockets were never very effective against tanks, because the required direct hits were unlikely. But they were extremely effective against the "soft" support vehicles.) 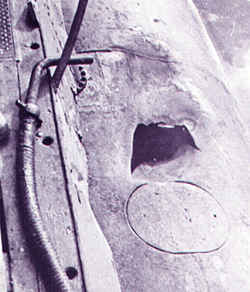 Above: The U-763 got extremely lucky when it was hit by a rocket that failed to detonate.

The use of the rockets against U-boats was quickly suggested. It was found, purely by accident, that a near miss at a shallow angle would curve upward to puncture the submarine's hull. The ideal aiming point was established as 60ft short of the target, and the 25lb armour- piercing warhead was used.

The first U-boat hit by an UP was U-752, which was damaged on 23 May 1943 by a Swordfish of 819 Sqn, based on the escort carrier HMS Archer. The U-boat was then attacked by a Wildcat and subsequently scuttled by its crew.

American rockets were based on the British weapon, but to ease production the USA developed its own versions. For the Navy, CalTech developed a 3.5in (89mm) rocket weighing 24.7kg, and fitted with a solid warhead. This was delivered from September 1943 onwards, and was usually called FFAR (Forward Firing Aircraft Rocket). A 5in version with a high-explosive warhead followed later, and finally the 5in HVAR (High Velocity Aircraft Rocket), better known as "Holy Moses". 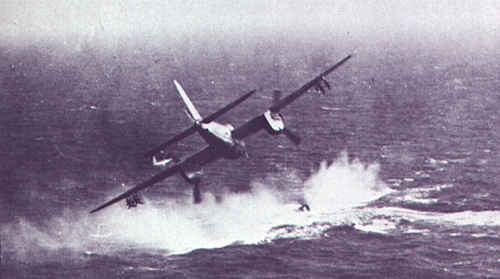 A rocket-equipped Mosquito aircraft attacking a German U-boat in the Kattegat on April 9 1945.