The Consolidated B-24 Liberator

An American B-24 Liberator in flight.

First flown on 29 December 1939, the Consolidated Aircraft Corporation's B-24 Liberator came along more than four years after the famous and popular Boeing B-17 Flying Fortress, and showed somewhat improved range and payload capabilities over the Fortress. Still, the performance was in most respects quite comparable, and one might question why the B-24 was built at all. Most, but not all, of the missions flown by B-24s were feasible with B-17s with comparable bomb loads. The B-24 was more difficult to fly, especially with one or more engines out, and much less survivable when forced to ditch in the ocean. The B-24 was also noticeably more expensive than the B-17 (averaging $295,516 per B-24 versus $223,742 per B-17) and all other major USAAF combat aircraft of the war, excepting only the much more advanced Boeing B-29 ($619,000).

More of the B-24 and its derivatives were built than any other multi-engine aircraft of the Second World War, and more than any other American aircraft in history. Sources seem to disagree on how many Liberators were built, with totals usually quoted between 18,188 and 19,203, making the Liberator about six percent of total American wartime production. The differences in the totals are probably due to the extremely complex production program. First production was at the Consolidated factory in San Diego, California. As orders increased, this factory was rapidly expanded until it employed 45,000 people and eventually built 6,724 examples of the complex B-24. Demand for the B-24 was such that even this impressive production was inadequate. Convair (Consolidated merged with Vultee in 1941 to form Convair) set up an additional factory in Fort Worth, Texas, and 30,000 workers built 3,034 additional Liberators there. Additionally, Douglas Aircraft Corporation built about 964 B-24s in its factory in Tulsa, Oklahoma, and North American Aviation built about 966 in Dallas, Texas. The largest Liberator factory was Ford's huge new factory built at Willow Run, Michigan, which turned out 6,792 completed aircraft and 1,893 disassembled, crated airframes for final assembly elsewhere. In 1944, the Willow Run factory alone turned out 92,000,000 pounds (42,000,000 kg) of airframes, nearly equaling the production of the entire Japanese aircraft industry that year, or almost half of the entire German output. Peak production by all factories produced a B-24 every 55 minutes. These factories and several major depots also performed many conversions, often of hundreds of aircraft. This lead to more than sixty different designations for variations of the B-24 airframe. There were bomber, patrol bomber, reconnaissance, cargo, tanker, trainer, experimental, civil, and other variants.

All versions of the Liberator were powered by the Pratt and Whitney R-1830 Twin Wasp, a 14-cylinder air cooled radial engine. The XB-24 prototype and the six LB-30A models had R-1830-33 engines without superchargers. Subsequent versions of the B-24, including bomber, cargo, and trainer variants and the US Navy's PB4Y-1 had General Electric turbo-superchargers to enhance performance at high altitudes. The PB4Y-2 dispensed with turbo-superchargers because their patrol bomber missions were expected to be strictly low-altitude operations. 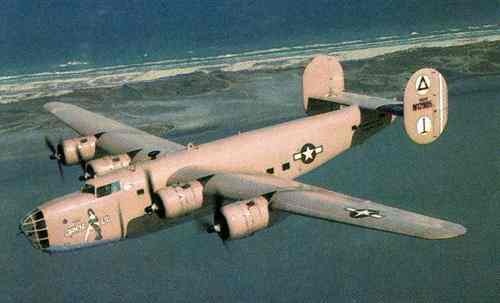 The aircraft featured a high-mounted full-cantilever wing spanning 33.5 m, and most had twin tail. The last aircraft variants based on the B-24 airframe, the XB-24K, XB-24N, YB-24N, and PB4Y-2, had a large single tail fin. The wing was called the Davis Wing after David R. Davis, the man who conceived the wing's advanced profile. When first tested in a wind tunnel at the California Institute of Technology, CalTech's engineers were hesitant to report the results because the wing showed efficiency that exceeded what was thought possible, and exceeded that of other contemporary wings by about 20 percent. Though the wing, stabilizers, and fins were all-metal, the ailerons, elevators, and rudders were fabric-covered. All versions of the Liberator had tricycle undercarriage.

The semi-monocoque fuselage had a boxy cross section. Bomber crews took full advantage of the flat sides, often painting extravagant artwork, and usually including a provocative female on the nose of the aircraft. The bomb bay doors were a unique design which rolled up the sides to reveal two racks in each of the two bays. A narrow catwalk between the racks allowed brave crewmen to transit between the forward and aft fuselage sections, or to service the bombs and racks.

Early versions of the B-24 were heavily armed by pre-war standards, the B-24A having two .30 caliber machine guns in the tail and six .50 caliber weapons (one in the nose, one in a ventral position, two in an upper turret, and one on each side at the waist positions). Early in the war, both the RAF and the USAAF found this armament inadequate, and additional machine guns were added in subsequent versions.

The USAAF and US Navy quickly perceived a need for vast numbers of B-24s, and five large factories were eventually set up for B-24 construction. The B-24D was built by Consolidated Vultee in San Diego, California (2,425 built) and in Fort Worth, Texas (303 built), and by Douglas Aircraft Corporation in Tulsa, Oklahoma (10 built).

The B-24E was very similar to the B-24D, but had different propellers. Consolidated produced 144 of the B-24E, while Douglas built 167, and Ford built 490 in its huge, newly constructed factory at Willow Run, Michigan.

The next major production variant was the B-24G, which was also similar to the B-24D, but introduced a power-operated nose turret. North American built 430 of these in its Dallas factory.

The B-24J was the most numerous production variant, with 6,678 being produced by all four manufacturers. It included improved nose and tail turrets, jettisonable waist gun mounts, a new autopilot, and an improved bombsight. Ford and Consolidated also built 1,667 of the B-24L, and 2,593 of the B-24M, which featured variations in the tail gun turrets.

The US Navy acquired many B-24Ds from the USAAF for anti-submarine operations, and also 977 of the PB4Y-1, which were either converted from the B-24D with the addition of an Erco nose turret, or from the B-24J, B-24L, or B-24M with a Consolidated nose turret. Later came 736 of the much-modified PB4Y-2, with unsupercharged engines, single tail, two upper turrets, no ball turret, twin guns in each waist position, an extra 2.1 m added to the length of the fuselage, and many other improvements. The PB4Y-2 was so modified that it got a different name, being called Privateer.

One B-24A was parked at Hickam field on the morning of December 7, 1941. This aircraft, 40-2370, was so large that it attracted immediate attention from Japanese bombers and became the first American aircraft destroyed by enemy action in the Second World War. 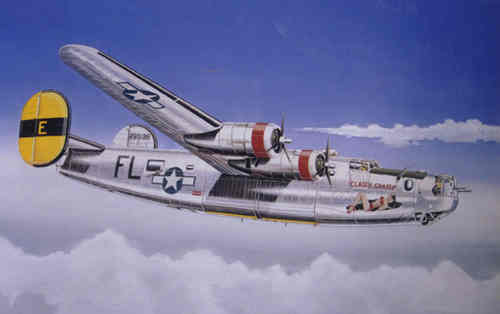 Service in the Atlantic Ocean

The Liberator contributed heavily in the Atlantic battles. According to one author, RAF Coastal Command Liberators sank, or assisted in sinking, 70 U-boats, starting with U-597 sunk off Iceland 12 October, 1942 by No. 120 Squadron. Four of these kills were made by Czech pilots of RAF No. 311 Squadron. Some of No. 311 Squadron's Liberators were equipped with four 5-inch rockets on airfoil-shaped mounts forward of the bomb bays, and such rockets were used in sinking one U-boat.

The most famous Liberator mission was made from the Benghazi area of Libya on 1 August, 1943 by 179 B-24s of the USAAF IX Bomber Command. The targets were seven refineries near Ploesti, Rumania, well out of reach of any other Allied bomber at that time. While the target was badly damaged, it was quickly repaired. Two bombers crashed on or shortly after take-off, 12 aborted, 43 were shot down by the enemy, 56 others received significant battle damage, and 8 were interned in Turkey. Only 99 returned to their own bases, while 15 others managed to land in other Allied-controlled areas.

The US 8th Air Force used Liberators along with B-17s to attack strategic targets in Europe from English bases. Loss rates were initially very high for both bomber types, but eased considerably as Luftwaffe resistance collapsed in the face of long-range fighter escort in the first half of 1944. The accurate German flak was always a serious threat and the Liberators, because they flew a few thousand feet lower than the Fortresses, became known as "flak magnets". A positive aspect of the lower altitudes was improved bombing accuracy.

There are many who believe the Liberator was not as tough as the B-17 against the fierce opposition over Europe. There are various arguments as to the validity of this assessment. One might point out that the highest losses of any 8th Air Force bomb group was achieved by a B-17 unit, but this is not entirely fair because B-17 and B-24 groups often did not hit the same targets. It is enough to say that both types did the job they had to do.

U-boats sunk by this aircraft type (B-24)