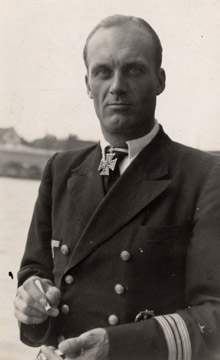 25 Aug 1942
02.42 hrs, mid Atlantic south of Greenland: HNoMS Eglantine obtained a radar contact when she approached the survivors from the sunken Trolla astern of convoy ONS 122. She abandoned rescue operations to investigate the contact, which was U-256, which dived when the area was illuminated with star shells. At 02.47 hours, the corvette attempted to drop depth charges, but both throwers misfired and the trap jammed after only one had been dropped. This nonetheless proved accurate, and a leaking exhaust vent caused the stern-heavy U-boat to sink to a depth of 200m (656 ft). The corvette made two more runs, dropping eight and then ten depth charges, but had to return to the convoy at 02.58 hrs. U-256 managed to surface about 30 minutes later but was forced to break off the patrol due to the damage sustained. (Sources: ADM reports, KTB U-256)

08.30 hrs, Bay of Biscay: the Whitley (misidentified as a Wellington) strafed the inbound U-256 and dropped two or three bombs that fell some 15m (50ft) astern. The Germans observed flak hits on the cockpit and saw the aircraft fly off very low leaving a smoke trail. Its crew sent an SOS and probably ditched. The crew of five was lost. U-256 was badly damaged and limped into Lorient the next day; some damage to the deck was apparently caused by one of the aircraft propellers.

16 Nov 1943
02.08 hrs, Bay of Biscay, inbound: a Halifax Mk.II bomber (502 Sqn RAF/D, pilot F/O F.T. Culling-Mannix, RNZAF) approached the boat passing about 200m (656 ft) astern, and was hit by flak in the starboard wing tip and turned away. When the Halifax returned to the area the U-boat had dived. (Sources: Franks/Zimmerman)

21.48 hrs, mid Atlantic: the boat saw an aircraft crash into the sea close by. U-256 had not fired at the aircraft, which apparently crashed due to pilot error while preparing for a low level attack. All six aircrew were lost.

23.12 hrs, Bay of Biscay, inbound: the boat was illuminated by Leigh Light and strafed by the Liberator. The Germans observed hits to the right wing from the 20mm AA guns and to the fuselage from the 37mm AA gun. Flames were seen coming from the bomb bay and one of the engines as the aircraft passed astern of U-256 at a height of 50m (55 yards), dropping six depth charges, and then crashed into the sea 500m (547 yards) away, killing the crew of ten. The boat was not damaged in the attack.

Unlike many other U-boats, which during their service lost men due to accidents and various other causes, U-256 did not suffer any casualties (we know of) until the time of her loss.