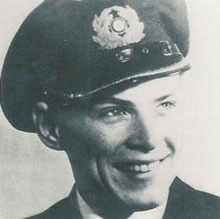 The German U-boat of World War Two was designed to operate mostly on the surface and submerge only for evasion or for rare daylight attacks. In 1940 the surfaced U-boat was even more secure near a convoy than submerged as the allied ASDIC could detect him underwater but was useless against a surface vessel. It was only with the continued Allied inventions that the U-boat was forced to spend more and more time underwater and then it was only running on a limited electric motors which only managed a few knots and had very limited endurance.

In 1940 when the German army defeated the Netherlands a stroke of luck landed up on the German Navy, namely the Dutch invention the German called somewhat rudely the Schnorchel. The Dutch navy had been experimenting as early as 1938 (on the submarines O 19 and O 20) with a simple pipe system which enabled a periscoping submarine to operate its diesels and thus have almost unlimited underwater range. Earlier experiments with this idea by the Dutch Navy had begun earlier in the inter-war period.

The German Navy paid little attention (they actually thought about this system in 1940 as a means to take fresh air into the boats but saw no need to run the diesels underwater) and in fact had the schorchel removed from the 3 captured Dutch submarines (UD-3, UD-4 and UD-5 in 1941 (1) The Royal Navy also did the same with the Dutch boats that escaped the German forces. It was not until 1943 when more and more U-boats were lost to the Allied counterattack that the system fell into favor with the high command.

The Schornel was taken into service as an afterthought (but the XXI and XXIII types were designed in 1943 to use the technology to its fullest) and fitted on the VIIC and IXC classes.

ventilation for diesels (1) but his ideas was not acted upon. 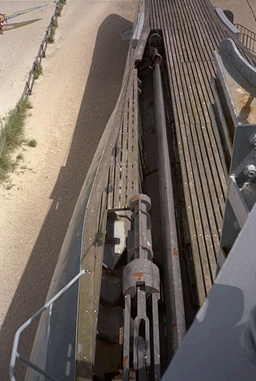 Above is the Schnorchel installation on board the U-995.
The boat is on display at Laboe, Germany.

The first boat to be fitted with the Schnorchel was U-58 which experimented with the equipment in the Baltic during the summer of 1943 but operational boats didn't start to use it until early 1944 and even as late as June 1944 only about half of the boats stationed in the French bases had Schnorchels fitted.

On type VII boats the folding mast was fitted on the port side (see photo on the left) while on the IX types the mast was on the starboard side. The XXI and XXIII types both had periscopic air masts (they rose vertically through the conning tower close to the periscope).

There were several problems with the Schnorchels; first it turned the attacking/patrolling U-boat into a slow (6 knots was the max speed for the VII and IX types, otherwise the air mast would break off) and almost deaf weapon. Second were the various disposal problems associated with the permanently submerged boat; garbage had to be stored internally and further fouled up the boat. Third was the problem with the initial schnorchel masts that they tended to close up and thus the diesels, being starved of air from above, sucked all available air from the boat itself and causing extremely harmful ear pains and sometimes even damaged ear drums.

U-boats fitted out with Schnorchels

Read about all the U-boats of 1943-1945 that were fitted out with the Schnorchel.


All illustrations by R. James Brant