What happened on
6 April?

Light cruiser of the Bahia class 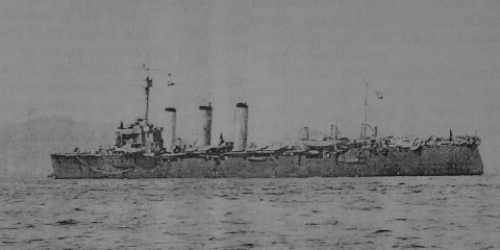 We don't have any commands listed for BZ Bahia (C 12)

The rescue The cruiser Rio Grande do Sul reached the point to change service with the cruiser Bahia at station number 13 but does not found it, The capitain does not know about the sinking because the cruiser Bahia took 5 minutes to sink and nobody was able to send a S.O.S. The Captain Garcia D`?vila right armless asked to be abandoned with the ship. 271 officials and sailors were scattered at sea the majority wounded and burned. Four days later a British merchant SS Balfe commanded by captain Thomas Joseph Sweeney was alerted by cook boy aged 17, Raymond Charles Rhimms who heard a strange sound looks like a "Cukoo" of a seabird but in true was the word "Socorro" (help in Portuguese)Raymond saw a man and after 4 in a raft . SS Balfe rescued 36 men five perished thereafter and the lone officer survivor the only Brazilian who speak English. So the alert was given. Cruiser Rio Grande do Sul rescued 6 and others boats 5 men. At final only 36 men survived 339 perished - 335 Brazilians and 4 Americans. The major part drowned or succumbing to wounds and sharks. (1)