Submarine of the Balao class 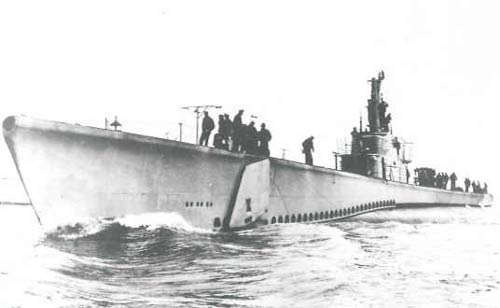 7 Feb 1945
USS Lagarto (Cmdr Frank Devere Latta) departed from Pearl Harbor for her 1st war patrol, and was ordered to patrol off the Ryukyu Islands.

Apr 2005
In late April 2005 a wreck what is thought to be the Lagarto was found by British wreck divers Jamie Macleod and Stewart Oehl in 230 feet of water in the Gulf of Thailand. It was located by comparing its last known position with stories from fishermen who told of snagging fishing nets in that vicinity. Using war records and then sonar, divers found a bump on the bottom of the ocean. They went down and found the submarine still intact and sitting upright, everything still on it. Massive damage had been done to her portside bow area. The outer plating was destroyed and a hole blown inward into the forward battery room and normal fuel oil tank number one. This is presumed to have been the result of depth charging which sunk the Lagarto. (1)

Jun 2006
In mid June 2006, the United States Navy dived a wreck of what is thought to be Lagarto. See this news item for more info.