What happened on
27 June? 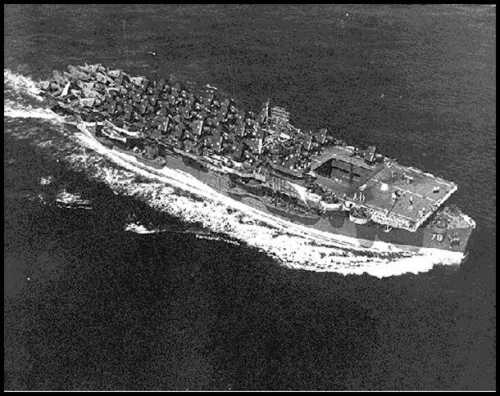 This operation had two objects, the first object was to destroy enemy shipping between Bud and Kvatholm. The second object was to lay air mines at Skateströmmen (near Maloy).

at 0900A/11, ' Force 2 ', made up of the heavy cruiser HMS Devonshire (Capt. G.M.B. Langley, OBE, RN), escort carriers HMS Premier (A/Capt. R.J. Gardner, RN), HMS Puncher (Capt. R.E.S. Bidwell, RCN) and the destroyers HMS Cavendish (Cdr. R.H. Maurice, DSO, RN), HMS Cavalier (Lt.Cdr. D.T. McBarnet, RN), HMS Zebra (Lt.Cdr. E.C. Peake, RN) and HMS Scourge (Lt.Cdr. G.I.M. Balfour, RN), departed Scapa Flow. They followed the same route as ' Force 1 ', adjusting course and speed so as to make rendezvous with ' Force 1 ' after their anti-shipping sweep in position 62°23'N, 02°00' between 0500A/12 and 0700A/12, when the forces were to join under air cover from the escort carriers. Rendezvous was effected at 0700A/12 and the Commanding Officer of HMS Devonshire assumed overall command. ' Force 1 ' had encountered no enemy vessels during their anti-shipping sweep during the night of 11/12 February. At 1000A/12 the air strike was flown off in ideal weather conditions.

The air laid lay was planned for eight mines, but only seven Avengers of 856 Squadron on board HMS Premier were serviceable, and these, together with four Wildcats from the same escort carrier and a further twelve from HMS Puncher, took departure at 1017A/12 from position 62°16'N, 01°48'E. Shortly afterwards one of the Avengers was forced to return with a heavy oil leak, but the remainder made landfall on Vaagso Island and, continuing up Faa Fjord, laid five mines in the channel at Skatestrommen. One aircraft was unable to release its mine and jettisoned it later at ' safe '. Little opposition was encountered and all aircraft returned to the escort carriers, being landed on by 1151A/12. One Wildcat from HMS Premier was found to have been hit by flak and two from HMS Puncher fired two short bursts from its guns in the process by accident, causing five casualties and damaging a Barracuda parked on the starboard side of the flight deck.

When all aircraft of the strike had been recovered the combines fores retired to Scapa Flow, using the same route as on the outwards passage. HMS Norfolk and HMS Dido were detached at 1735A/12 to return at high speed unescorted. They arrived at Scapa Flow at 0330A/13. The remaining ships arrived around 1050A/13. (1)

The operation however had to be cancelled due to the weather conditions rendering flying impossible. The ships remained in the area for about three days but weather did not improve.