Minesweeper of the Algerine class

Two photographs of the crew of HMS Rifleman, both taken at Malta. Photographs with thanks to Vincent Camilleri, Australia. 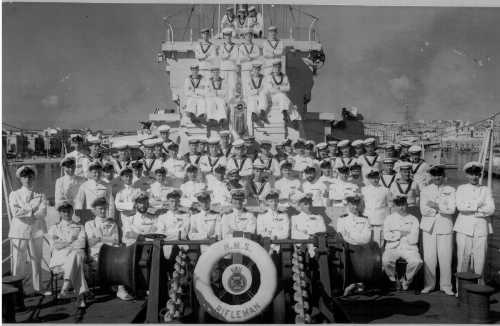 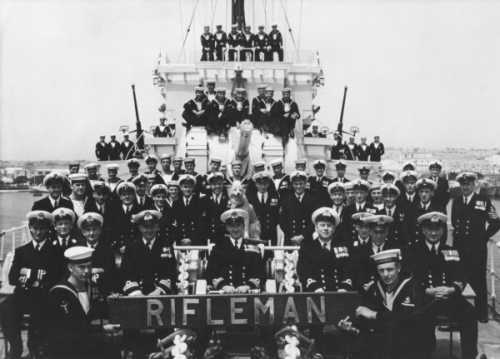 Later the same day she departed Stornoway for Tobermory. (2)

Sweeping of mines off Phuket; bombardment and air strikes directed against appropriate targets.

The force passed through Sombrero Channel during the night of 22/23 July 1945 and arrived off Phuket in the morning of 24 July.

The area which had been given first priority was cleared of mines of as a result of operations carried out of 24th, 25th, and 26th July. A total of 24 mines were swept.

During the minesweeping operations HMS Squirrel was mined and damaged forward. Two and a half hours after hitting the mine she took a heavy list and therefore had to be sunk by our own forces. Seven ratings were lost with the ship.

In strikes against targets on the Kraa Isthumus, our aircraft achieved commendable results. Three small ships were destroyed and eleven others strafed in the Singora area, while fifteen locomotives were put out of action and rolling stock strafed on the railway system between Bandon and Dhungsong. A camp at Huatsei was bombed. One Sungei Patani airfield six grounded aircraft were destroyed, three left burning and two others hit. In all these operations only one Hellcat fighter was lost.