Sloop of the Grimsby class 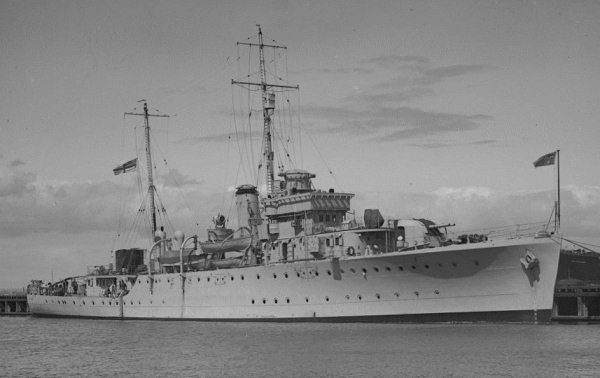 This convoy departed Sydney on 14 September 1940.

At dawn on 21 September the sloop HMAS Warrego (Cdr. R.V. Wheatley, RAN) joined in the approaches to Fremantle. The convoy arrived at Fremantle later the same day.

HMAS Warrego parted company around 0615H/23 and returned to Fremantle.

The convoy arrived at Colombo on 1 October 1940.

The escort parted company with the convoy around 0800C/10 to join southbound convoy SW 2.

The convoy arrived at Brisbane on 22 December. (1)

This convoy departed Sydney on 28 December 1941.

31 May 1942
HrMs Tromp (Cdr. J.B. de Meester, RNN) returned to Sydney. After fuelling she departed for yet another convoy mission.

This convoy departed Caloundra on 10 August 1942.

On departure from Caloundra, around 2000K/10, the convoy was escorted by the destroyer HMAS Stuart (Cdr. S.H.K. Spurgeon, DSO, RAN) which parted company around 1200K/12, in the Capricorn Channel. The convoy then continued on unescorted.

On 13 August the Kooliga parted company and entered Bowen.

On 14 August the Daniel Boone parted company and entered Townsville.

On the 16th the minesweeper HMAS Warrnambool (T/Lt. E.J. Barron, RANR(S)) joined coming from Port Moresby but she parted company again shortly afterwards taking the ships of convoy B 3 with her, these were the transports Perida and Sea Witch.

convoy A 3, made up of the Anshun, 's Jacob and Van der Lijn and escorted by HMAS Warrego and HMAS Bendigo arrived at Fall River (Milne Bay) around 1800K/17.

Around 1100K/7, ships of Task Force 44, the heavy cruiser HMAS Australia (Capt. H.B. Farncomb, RAN, flying the flag of Rear-Admiral V.A.C. Crutchley, VC, DSC, RN), light cruiser USS Phoenix (Capt. H.E. Fischer, USN) and the destroyers USS Selfridge (T/Cdr. C.D. Reynolds, USN, with Capt. C.W. Flynn, USN, commanding Destroyer Squadron 4 on board) and USS Bagley (T/Cdr. G.A. Sinclair, USN) departed Brisbane to patrol in the Coral Sea so as to be in position to support operations in the Milne Bay area if called upon. Reinforcements were to join as soon as possible as some ships of Task Force 44 had been detached on other duties or were undergoing repairs.

On departure from Brisbane it had been intended to conducted gunnery exercises using a target that was being towed by the auxiliary M/S trawler HMAS Tongkol (?). Bad weather conditions hover prevented the exercises proceeding as the towline of the target fouled the srew of HMAS Tongkol. USS Bagley briefly stood by the M/S trawler but rejoined the other ships later the same day.

Around 1 830K/9, USS Selfridge and USS Bagley parted company with the cruisers for a night encounter exercise. On completion of the exercise they rejoined the cruisers.

During the forenoon Allied bomber aircraft made contact with the force in order to learn the recognition and identification of our ships.

At 1500K/9, course was reversed to make contact with the destroyers USS Helm (T/Cdr. C.E. Carroll, USN) and USS Henley T/Cdr. E.K. van Swearingen, USN) who were approaching the area coming from Efate. They were however not sighted and at 1745K/9 course was shaped to the north-west and speed was increased to 22 knots.

Around 0700K/10, USS Helm and USS Henley were sighted and joined company and the force then entered the area in which it had been intended to operate. Course was thus set to the northward at 15 knots to get within striking distance of Milne Bay whilst awaiting the results of our land based reconnaissance aircraft.

By 1800K/10, no reports of enemy forces had been received to Task Force 44 retired to the southwards for the night.

At daylight Task Force 44 turned and steered towards the north-east to await the result of this mornings air reconnaissance.

The forenoon air searches had not located any enemy forces within reach of Milne Bay. Task Force 44 therefore turned to the south-east and USS Selfride and USS Bagley were ordered to fuel from HMAS Australia and USS Phoenix. Fuelling was barely begun when an aircraft report was received placing two enemy destroyers east of the Trobriand Islands at noon steering to the south-west. As this was the type of force that had previously been sent into Milne Bay and that when these ships would continue to Milne Bay they would find the destroyer HMAS Arunta (Cdr. J.C. Morrow, DSO, RAN) and two transports there.

Fuelling was at once stopped and Rear-Admiral Crutchley ordered Captain Flynn to proceed, from position 13°09'S, 148°03'E, with USS Selfridge, USS Helm, USS Henley and USS Bagley at 28 knots towards Milne Bay to destroy any enemy force entering or found in the bay or to withdraw to the southward in case the enemy was forced to withdraw due to our bombing by land based striking forces or to withdraw by early dawn if his force had entered Milne Bay and contact had not been made with the enemy.

Meanwhile HMAS Australia and USS Phoenix would proceed to the northward to be in position to provide cover if needed. At 1600K/11, a reconnaissance aircraft reported an enemy cruiser north of Woodlark Island and on a southerly course. It was seen that this enemy vessel could also reach Milne Bay during the night and Rear-Admiral Crutchley therefore turned his cruisers towards China Strait at 22 knots. At 1630K/11, an air striking force from Port Moresby attacked the two enemy destroyers which had now reached Normanby Island and scored on hit on the stern of one of them, setting her on fire and bringing her to a standstill. The second enemy destroyer was last seen at 1725K/11, heading 160° at 30 knots. No other report subsequent to the original sighting report was received of the enemy cruisers. It seemed, therefore, that one enemy destroyer and one enemy cruiser might enter the Milne Bay area during the night and that Captain Flynn's force would be ample to deal with them. [The Japanese destroyers were the Isokaze and Yayoi of which the last one was sunk in position 08°45'S, 151°25'E.]

By 2030K/11, no further information had been received and so being confident that cruiser support was not required, Rear-Admiral Crutchley turned HMAS Australia and USS Phoenix to the southward to make rendezvous with HMAS Hobart the next morning. Speed was set to 17 knots.

Around 0800K/12, HMAS Hobart joined having steamed from Brisbane at 22 knots. The three cruisers then shaped course to the northward to make contact with the four destroyers now withdrawing from the Milne Bay area.

Around 1600K/12, the destroyers rejoined. USS Helm and USS Henley were at once fuelled by HMAS Australia and USS Phoenix.

Captain Flynn reported that they had entered Milne Bay at 2345K/11 and then swept to the westward to 150°33'E and then patrolled east and west between that longtitude and 150°54'E on either side of latitude 10°24'S. They had cleared China Strait at 0615K/12 and had sighted nothing of interest. HMAS Arunta and two transports then entered the Bay at 0600K/12.

On completion of fuelling the two destroyers Task Force 44 set course to the south-west of the night.

Shortly after noon, HMAS Henley obtained a promising A/S contact which was immediately attacked with a full pattern of depth charges after which contact was lost. An A/S patrol launched by HMAS Australia then patrolled the area of the attack but found no sign of an enemy submarine being present.

During the night the force proceeded to the southward.

Around 1400K/15, Task Force 44 turned to the South-West to proceed to Challenger Bay, Palm Islands to fuel.

At 0545K/15, USS Phoenix launched two aircraft for A/S patrol off Grafton Passage through which the force was to pass.

Task Force 44 passed through the Grafton Passage around 0745K/15 and arrived at Challenger Bay around 1545K/15. They now had to wait for the tanker to arrive, meanwhile the sloop HMAS Warrego (Lt.Cdr. A.D.C. Inglis, RN) conducted A/S patrol off the bay. This duty was later taken over by HMAS Castlemaine (T/Lt.Cdr. P.J. Sullivan, RANR(S)).

A transport with fresh supplies was also sent from Townsville. (4)