Destroyer of the G class 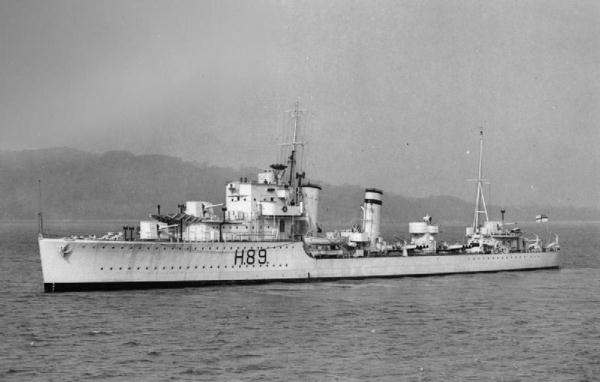 At sea they were joined by the aircraft carrier HMS Glorious (Capt. G. D’Oyly-Hughes, DSO and Bar, DSC, RN) and her attendant destroyer HMS Bulldog (Lt.Cdr. J.S.M. Richardson, RN) which had already been exercising off Alexandria since 30 August.

The Fleet returned to Alexandria in the morning of 1 September 1939. (1)

During the exercises HMS Malaya, HMS Glorious, HMS Daring and HMS Bulldog split off. They were to proceed to the Indian Ocean (Socotra area). They arrived at Port Said later the same day. (3)

Two of these ships came from Alexandria (don’t know which) and joined on the 12th.

HMS Duncan and Kersaint were relieved on the 17th by HMS Gallant (Lt.Cdr. C.P.F. Brown, RN) and HMS Grafton (Cdr. M.S. Thomas, RN). They remained with the convoy until the 18th after which the convoy continued unescorted to Gibraltar.

At sea she joined HMS Gallant (Lt.Cdr. C.P.F. Brown, RN) and HMS Grafton (Cdr. M.S. Thomas, RN) that were also to proceed to Gibraltar and had departed Alexandria on the 10th. (4)

This convoy departed Halifax on 17 October 1939 and the bulk of the convoy arrived at Liverpool on 29 October 1939.

In the early hours of 29 October the German submarine U-34 attacked the convoy and the merchant vessel Malabar was torpedoed and sunk. The survivors were picked up by HMS Grafton.

On 30 October the merchant vessel Cairnmona which had split off from the convoy was torpedoed and sunk off the west coast of the U.K. by the German submarine U-13

This convoy departed Leith at noon on 15 April 1940 for Scapa Flow.

26 Apr 1940
The Polish destroyer Burza and the British destroyer HMS Grafton were part of an escort of small convoy (two cargo ships and one tanker). Those vessels were sailing to Skjel Fjord, Norway where an Allied supply base was located. (6)

27 May 1940
On the 27 May HMS Grafton (Cdr. C.E.C. Robinson, RN) ferried 860 men to Dover and returned the following day to pick up another 800. On passage back to England, Grafton stopped to assist with the rescue of survivors from another destroyer that had been sunk, but whilst doing so was herself torpedoed by a U-Boat. Despite being packed with troops, Only 4 people were killed and other vessels took on the remaining troops and ship's company. Grafton was scuttled by gunfire. (6)