Destroyer of the S class 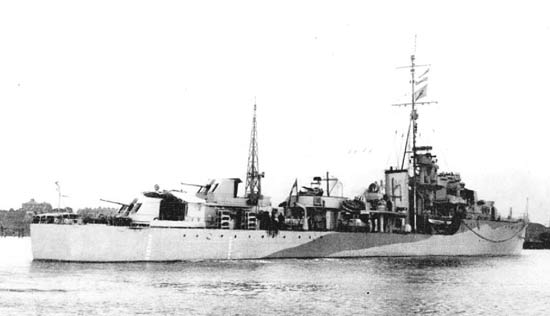 The destroyers returned to Scapa Flow later the same day. (2)

16 May 1945
On 9 May 1945 the Japanese heavy cruiser Haguro and the Japanese destroyer Kamikaze (both offsite links) left Singapore for a transport run to the Andaman Islands. They were sighted the next day in Malakka Strait by the British submarines HMS Statesman (Lt. R.G.P. Bulkeley, RN) and HMS Subtle (Lt. B.J.B. Andrew, DSC, RN). To intercept the Japanese ships a task force made up of 2 battleships, 1 heavy cruiser, 2 light cruisers, 4 escort carriers and 8 destroyers left Trincomalee. Aircraft from the escort carriers attacked the Nicobar Islands on the 11th, forcing Haguro and Kamikaze to head back to Singapore.

On the 14th the Japanese ships again depart from Singapore for the Andaman Islands. They were spotted the next day north-east of Sabang by aircraft the British escort carrier HMS Shah (Capt. W.J. Yendell, RN). A few hours later they were attacked by aircraft from the British escort carrier HMS Emperor (Capt. Sir C. Madden, RN) causing light damaged to Haguro. In the meantime Japanese aircraft have sighted Allied destroyers closing in on Haguro and once again the Japanese ships reverse course.

In anticipation on the Japanese reversal of course the commander of the British 26th DF, Capt. M.L. Power, CBE, DSO with Bar, RN on board HMS Saumarez and the other British destroyers HMS Venus (Cdr. H.G.D. De Chair, DSC with Bar, RN), HMS Verulam (Lt.Cdr. D.H.R. Bromley, DSC, RN), HMS Vigilant (Lt.Cdr. L.W.L. Argles, DSC, RN) and HMS Virago (Lt.Cdr. A.J.R. White, DSC, RN) plotted a course to intercept the Japanese ships which they did shortly before midnight on the 15th. After careful manoeuvring the destroyers began attacking the Japanese ships from all sides shortly after one o'clock on the 16th. The Haguro was hit by torpedoed and gunfire and sank around 0230hours in position 04°49'N, 99°42'E but not before she hit the Saumarez with gunfire. The escorting Japanese destroyer Kamikaze escapes with only minor damage.