Destroyer of the V class 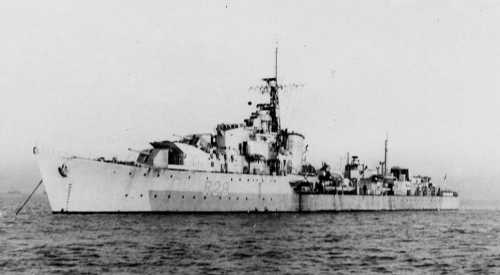 Upon completion of these exercises HMS Voracious departed Scapa Flow for Holy Loch. She was escorted by HMS Sardonyx (T/A/Lt.Cdr. E. Playne, RNVR). (5)

Operation Bishop, Carrier raid and surface bombardment of Car Nicobar and Port Blair and to provide cover for Operation Dracula which are amphibious landings off Rangoon, Burma.

An oiling force (Task Force 69), made up of the Royal Fleet Auxiliary tankers Olwen (6470 GRT, built 1917) and Easedale (8032 GRT, built 1942) escorted by the British destroyer HMS Paladin (Lt. H.R. Hewlett, RN) had departed Trinomalee on the 26th. HrMs Tromp and the destroyers were fuelled from this force on the 29th.

At dawn on the 30th air attacks were carried out against Car Nicobar followed by a bombardment of the airfields At 0600/30, HMS Queen Elizabeth and HMS Cumberland opened fire on the southern and northern airfields respectively from a range of 18000 yards Both ships soon found the range and it was not possible for any aircraft to take off after the bombardment. HMS Suffolk and HMS Ceylon then bombarded enemy AA positions. Shortly after sunrise around 0700 hours the destroyers HMS Rotherham, HMS Nubian and HMS Verulam started to bombard the settlement of Malacca. Soon afterwards a large fire, thought to be petrol, was seen near the jetty and another on one the southern airfield. At 0710 hours cease fire was ordered and a fighter strike was then commenced. They dropped bombs on and then strafed the airfields. At 0735 hours, after the fighter strike was over, the battleshios HMS Queen Elizabeth and Richelieu opened fire to crater the runways. They continued to fire on the runways until 0805 and 0809 respectively. Capt. (D) 11th destroyer flotilla on board HMS Rotherham meanwhile reported that the jetty at Malacca had been severly damaged and that two steam coasters and five small vessels had been destroyed.

At 1530/30, Richelieu, HMS Cumberland and HMS Rotherham were sent ahead to bombard Port Blair while on a northerly course. At 1730 hours Richelieu opened fire on the southern airfield and Cumberland on a coastal battery. Both firings were spotted by Hellcat fighters from the escort carriers. Later HMS Rotherham also engaged coastal batteries but from a closer range. Around 1835 hours these ships completed their bombardment but then HMS Queen Elizabeth, HMS Suffolk, HrMs Tromp, HMS Tartar and HMS Penn took over. Queen Elizabeth engaged the airfields while Suffolk worked over the marine yards with the same aircraft that had spotted for Richelieu and Cumberland. The other three ships engaged shore batteries. By the time the bombardment ceased after about 40 minutes the airfields were well cratered and hits were obtained on a lot of other targets. After the bombardment HrMs Tromp reported that she had seven wounded, two seriously (they both died later) from two near misses, at least that was thought at that moment. Later investigation however showed that the explosion was caused by American manufactured defective ammunition and not by enemy fire. Both bombarding forces then retired to the south an re-joined the escort carriers which had provided them with fighter cover during their bombardments.

During the night all ships proceeded southwards so as to bombard Car Nicobar a second time at dawn. At 0720/1 HMS Queen Elizabeth and HMS Suffolk opened fire on their target. After cratering the northern airfield Queen Elizabeth shifted target to the southern airfield at 0741 hours and carried out yet another effective shoot. At 0755 hours both ships ceased fire. HMS Cumberland and HMS Ceylon then took over. The French battleship Richelieu however did not participate in the bombardment this time as she had already expended her ammunition allowance. Cumberland enganged targets at/near the northern airfield and HMS Ceylon did the same working over the southern airfield. HMS Tartar was sent ahead to bombard the jetty at and targets in the village of Malacca. At 0915 hours all ships were again in one force and course was set to the north to conduct another bombardment of Port Blair but this time approaching from the north.

At 0800/2 HMS Queen Elizabeth opened fire on the runways of the airports and HMS Suffolk on coastal batteries. Again considerable damage was done to the airports and also a large petrol fire was started at one of them. At 0845 hours Richelieu (firing 6” from her secondary armament at the marine jetty) and HMS Cumberland took over. HMS Rotherham was ordered to take out an AA battery that was firing at the spotter aircraft and in this she succeded.

In the afternoon a signal was received that the landing off Rangoon had been successful and without opposition. The force now retired to the north-east for her cover position during operation Dracula.

On 4 May rendes-vous was again made with the oiling force and all ships were fueled by the Olwen. HMS Penn then remained with the Olwen while HMS Paladin joined Task Force 64.

On 6 May bombardments and air strikes were again carried out in the Port Blair area. As of 0700/6 Empress started to launch fourteen Hellcats while Shah launched eight Avengers and four Hellcats. At 0800 hours, HMS Queen Elizabeth, HMS Suffolk, HrMs Tromp and HMS Paladin opened fire on AA and coastal batteries in the vicinity of Phoenix Harbour, Hopetown Island and Ross Island in order to neutralise these defences for the air strike. At 0814 hours the air strike leaded ordered cease fire and a few minutes later the aircraft started attacking shipping inside Port Blair harbour. One aircraft was hit by enemy AA fire and failed to return to it’s carrier. HMS Tartar made a search for it but was unable to locate the aircraft or it’s pilot.

At 1730/6 HMS Queen Elizabeth bombarded a 6” gun known to be at Stewart Sound. The bombardment was completed at 1809 hours. HMS Suffolk meanwhile bombarded a pillbox on Sound Island with her 4” armament and appeared to have set the target on fire.

On 7 May another air attack was made on Car Nicobar by the carriers with a total of 10 Hellcats. With this air attack over course was set to return to Trincomalee.

16 May 1945
On 9 May 1945 the Japanese heavy cruiser Haguro and the Japanese destroyer Kamikaze (both offsite links) left Singapore for a transport run to the Andaman Islands. They were sighted the next day in Malakka Strait by the British submarines HMS Statesman (Lt. R.G.P. Bulkeley, RN) and HMS Subtle (Lt. B.J.B. Andrew, DSC, RN). To intercept the Japanese ships a task force made up of 2 battleships, 1 heavy cruiser, 2 light cruisers, 4 escort carriers and 8 destroyers left Trincomalee. Aircraft from the escort carriers attacked the Nicobar Islands on the 11th, forcing Haguro and Kamikaze to head back to Singapore.

On the 14th the Japanese ships again depart from Singapore for the Andaman Islands. They were spotted the next day north-east of Sabang by aircraft the British escort carrier HMS Shah (Capt. W.J. Yendell, RN). A few hours later they were attacked by aircraft from the British escort carrier HMS Emperor (Capt. Sir C. Madden, RN) causing light damaged to Haguro. In the meantime Japanese aircraft have sighted Allied destroyers closing in on Haguro and once again the Japanese ships reverse course.

In anticipation on the Japanese reversal of course the commander of the British 26th DF, Capt. M.L. Power, CBE, DSO with Bar, RN on board HMS Saumarez and the other British destroyers HMS Venus (Cdr. H.G.D. De Chair, DSC with Bar, RN), HMS Verulam (Lt.Cdr. D.H.R. Bromley, DSC, RN), HMS Vigilant (Lt.Cdr. L.W.L. Argles, DSC, RN) and HMS Virago (Lt.Cdr. A.J.R. White, DSC, RN) plotted a course to intercept the Japanese ships which they did shortly before midnight on the 15th. After careful manoeuvring the destroyers began attacking the Japanese ships from all sides shortly after one o'clock on the 16th. The Haguro was hit by torpedoed and gunfire and sank around 0230hours in position 04°49'N, 99°42'E but not before she hit the Saumarez with gunfire. The escorting Japanese destroyer Kamikaze escapes with only minor damage.