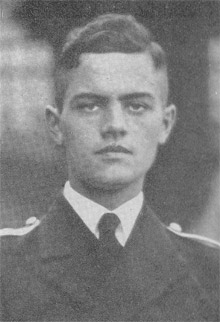 
Georg Schewe began his naval career as a seaman in October 1928. In 1932 he commenced officer training and received his commission in 1936. In the same year he transferred to the U-boat force, receiving a thorough pre-war training. In July 1939 he commissioned the type IIC U-boat U-60. After six patrols (with only one sinking) he left the boat in August 1940 to commission the much larger type IXB U-boat U-105.

From January 1941 U-105 operated mostly in Atlantic waters. During her second patrol in spring 1941 Kptlt Schewe achieved remarkable success when he sank 12 ships with a total of 71,450 tons. It was the second most successful patrol of the whole war, only beaten by Hessler's with U-107 a few months later. Georg Schewe left U-105 in February 1942 for a shore posting.

He became a staff member of the FdU Mittelmeer (U-boat Command Mediterranean). After more than two years in this position, in autumn 1944 he took over command of the 33rd Flotilla for a month. From October 1944 he was on the OKM (Naval High Command) staff. Following Germany's surrender he spent a year in allied captivity.