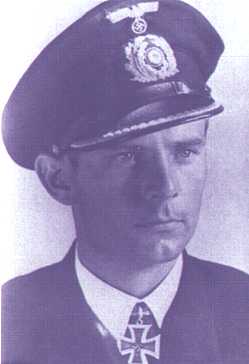 
Günther Hessler joined the Kriegsmarine in April 1927. Prior to being assigned to the U-Boot-Waffe (U-boat arm) he served on torpedo boats and the battleship Schlesien. He was the commanding officer of the torpedo boat Falke from April 1939 to March 1940.

In April 1940 he transferred to the U-boat force and six months later commissioned U-107. It was rare for an officer to take command of a U-boat without previous experience as a watch officer or Kommandanten-Schüler (Commander-in-training), but Hessler was an experienced Navy officer and he soon demonstrated that this was a correct decision: during his first patrol he sank four ships totalling 18,514 tons.

But it was the second patrol in U-107 that was to make him famous. Kptlt. Günther Hessler put out from Lorient at 19:30 on 29 March 1941 to sink the highest tonnage of Allied merchant ships of any U-boat patrol of the entire war. U-107 left base in company with U-94 (Kuppisch), but U-107 then headed south. Her operational area was around the Canary Islands and near Freetown, where she sank 14 ships totalling 86,699 tons, starting with the British merchant SS Eskdene which required two torpedoes and 104 rounds from the 105mm fast-firing deck gun. The largest ship sunk was the British Calchas of 10,305 tons. On 1 June 1941 Hessler sank what he assumed was a 'Q ship' (decoy vessel), the British Alfred Jones (wrongly, Q-ships having been withdrawn from service in March).

After leaving U-107 Hessler spent the rest of the war as 1.Asto (1st naval staff officer) on BdU op. (U-boat High Command, operations)

(Admiral Dönitz had only one daughter, so the claim made in some books that Adi Schnee also married a daughter of Dönitz' is untrue.)

Because Hessler was his son-in-law, Dönitz had some reservations about awarding Hessler his deserved Knights Cross, but eventually Grand Admiral Raeder signed the papers.

After the war Hessler spent over a year in Allied captivity. From 1947 to 1951 he was commissioned by the Royal Navy to write The U-Boat War in the Atlantic in three volumes, with the assistance of Korvkpt. Alfred Hoschatt, former commander of U-378 and later, on the staff of BdU op with Hessler.