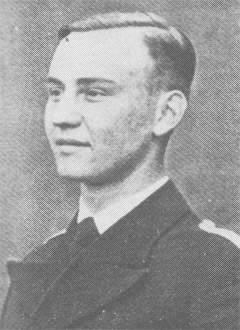 11 May 1943
Kvtkptn von Forstner had just slipped through the convoy screen of SC 129 and sunk two ships when the escort corvette HMS Gentian located and depth charged the boat. Damage was so severe U-402 was forced to return to base, reaching France on 26 May. (Sources: Blair, vol 2, page 329)

23.03 hrs, Bay of Biscay, outbound: after locating U-402 on radar British Wellington bomber MP791 (RAF Sqdn 172/Q, pilot F/O T. Armstrong) dropped six depth charges in a Leigh Light attack and then circled the boat after making a strafing run. At 23.13 hrs they observed another Wellington (Sqdn 172/D) making a Leigh Light attack and being shot down. Wellington Q-Queen was damaged when the port tyre burst on landing at Chivenor: unknown to the crew the undercarriage had been hit twice by flak. U-402 had hit both attackers and escaped undamaged.


8 Sep 1943
06.18 hrs, Bay of Biscay, outbound: investigating a radar contact, British Wellington bomber HF126 (RAF Sqdn 612/M, pilot F/O J.M. Bezer) flew over the boat and turned for a Leigh Light attack. The nose turret guns jammed and the aircraft received several AA hits just before releasing six depth charges. The Wellington had been hit in the nose, fuselage, tail, port engine and starboard wing, and the crew had to jettison all loose equipment, reaching Portreath on one engine 90 minutes later. U-402 was undamaged. (Sources: Franks/Zimmerman)

Unlike many other U-boats, which during their service lost men due to accidents and various other causes, U-402 did not suffer any casualties (we know of) until the time of her loss.