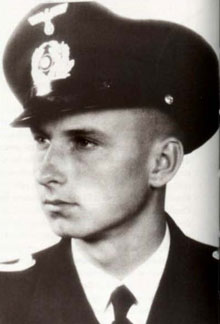 
Heinrich Schroeteler joined the Kriegsmarine in April 1936, and was part of the Olympia Crew. In September 1939 he began two years of service on minesweepers.

In September 1941 he transferred to the U-boat force and went on one patrol on U-96 as Kommandantenschüler (Commander-in-training). In October 1942 he commissioned U-667 and commanded her until May 1944 when he left to join the staff member of BdU op, where in July 1944 he replaced 'Adi' Schnee.

In January 1945 he served as training officer in the 27th (Training) Flotilla for a month before taking command of the type VIIC U-boat U-1023 in February 1945.

In the last days of the war Heinrich Schroeteler damaged a British tanker of 7,345 tons and on the evening of 7 May 1945, one day before Germany's surrender, sank the Norwegian minesweeper NYMS 382 (Rohwer, 1998). Three days later Schroeteler surrendered U-1023 at Weymouth (Niestlé, 1998). He then spent three years as a POW in Britain.