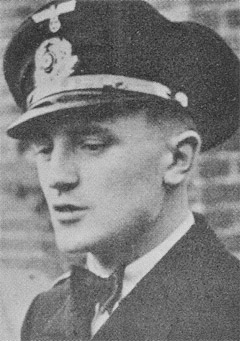 
Herbert Wohlfarth began his naval career in April 1933. After standard training he spent more than a year on the cruiser Admiral Graf Spee. In May 1937 he joined the U-boat force, and like many of the later successful commanders received a solid pre-war training under Admiral Dönitz. After some months as aide-de-camp in the 3rd Flotilla Lohs, in September 1938 he became watch officer on U-16.

On 19 October 1939 he took over command of the type IIB U-boat U-14. On his first three patrols he sank nine mainly smaller ships in Scottish and Norwegian waters. The fourth patrol in U-14 was for him, as for most other commanders during Operation Hartmut against Norway, unsuccessful.

On 15 June 1940 Herbert Wohlfarth commissioned U-137, another a type IIB boat, referred to as an 'Einbaum' (dugout canoe). But these small boats were also very successful and other well-known commanders including Hardegen, Kretschmer and Lüth won their first successes in them.

Herbert Wohlfarth led U-137 on three patrols during the autumn of 1940. He sank seven ships with a total of 25,465 tons, mostly in the area south of the Hebrides. Especially notable was his torpedo hit on the armed merchant cruiser HMS Cheshire (10,552 tons), damaged so badly that she had to spend six months in the shipyard for repairs.

In the U-boat force Herbert Wohlfarth was known by his nickname, Parzival. After a radio message to the BdU, reporting his successes with his 'dugout', he received the following praise from Dönitz:

This typical example of communication between Dönitz and his commanders became famous throughout the Kriegsmarine.

On 15 December 1940 Wohlfarth left U-137, and two months later commissioned the larger type VIIC U-boat U-556. On the first patrol in the Atlantic he sank four ships with a total of 18,583 tons and damaged two more.

During his return he witnessed one of the most disastrous events in the history of the Kriegsmarine, the sinking of the battleship Bismarck. Wohlfarth was unable to help because he had already fired all his torpedoes. He saw a battleship and an aircraft carrier pass in front of his boat on their way to sink the pride of the German fleet and could do nothing to hinder them.

On 15 May 1941 he received the Knights Cross for this patrol.
(See also: Dönitz and his aces)

On 19 June 1941 Wohlfarth started his second patrol in U-556, but only eight days later the boat was sunk by the British corvettes HMS Nasturtium, HMS Celandine and HMS Gladiolus southwest of Iceland. Kptlt Wohlfarth and most of his crew were captured (Niestlé, 1998).

Herbert Wohlfarth spent more than six years in English and Canadian POW camps before returning to Germany on 14 July 1947.