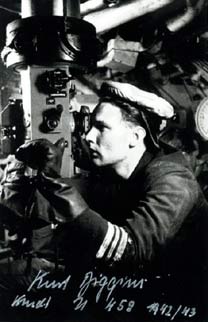 Joachim Brünner joined the Kriegsmarine in 1937. From Dec 1940 to Oct 1941 he was a Divisional Officer and Watch Officer on the light cruiser Leipzig. He joined the U-boat force and began his training in Oct 1941, finishing his courses in March 1942. Brünner was in personnel reserve with the 27th (Training) Flotilla from March to June 1942, and then at the U-boat base at Narvik until July, when he was assigned to the type VIIC boat U-703.

Oblt. Joachim Brünner returned to take command of his old boat, U-703, on 6 July 1943. He went on six patrols, sinking three ships with a total tonnage of nearly 12,000 GRT. Brünner died with his entire crew of 54 when the boat went missing in the Norwegian Sea east of Iceland sometime after 16 Sept 1944 (Niestlé, 1998).