What happened on
19 August? 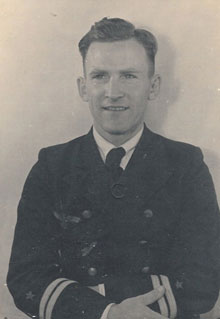 Burkhard Heusinger von Waldegg joined the Kriegsmarine in 1938. From Oct 1938 to Feb 1939 he served with the Basic training establishment at Stralsund then joined the sailing training ship Albert Leo Schlageter until June 1939. He served on the light cruiser Emden from July to Sept 1939 (Busch & Röll, 1999).

From June 1941 to Feb 1942 Heusinger von Waldegg served as a Watch Officer in sea training with the 5th (Training) Flotilla (training). He then went through U-boat familiarization (Baubelehrung) to learn all about the large type IXD2 boat being built at Bremen (Busch & Röll, 1999).

On 14 March 1942 KrvKpt. Wilhelm Schulze commissioned the new U-177 and Heusinger von Waldegg became its First Watch Officer (1WO). He served in that role until Oct 1942 (Busch & Röll, 1999). After training in the Baltic the boat left for its first war patrol on 17 Sept 1942, but by then had a new Commander, the ace KrvKpt. Robert Gysae.

Having left the successful boat with valuable experience he went through U-boat Commander training with the 24th (Training) Flotilla from Oct 1943 to Jan 1944 (Busch & Röll, 1999).

On 21 Jan 1944 Oblt. Burkhard Heusinger von Waldegg took command of the U-198, a sister boat of U-177. He left La Pallice, France for his first patrol as Commander on 20 April 1944. During the patrol he again went to familiar seas south of Africa and into the waters around Madagascar (Busch & Röll, 1997).

U-198's patrol came to an sudden end when the boat was sunk with all hands, 66 men, on 12 Aug 1944 in the Indian Ocean near Seychelles by depth charges from the British frigate HMS Findhorn and the Indian sloop HMIS Godavari (Niestlé, 1998).