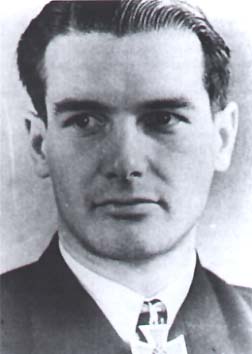 Heinrich Lehmann-Willenbrock began his naval career in April 1931, serving for more than a year on the light cruiser Karlsruhe (together with Karl-Friedrich Merten) and 18 months on the sailing school ship Horst Wessel.

In April 1939 he transferred to the U-boat force, and completed standard officer training. After a short time on board U-8 he took command of U-5 in December 1939. Lehmann-Willenbrock made his first patrol in Norwegian waters during Operation Hartmut (the occupation of Norway in spring 1940).

After three months of training the U-boat was attached to the 7th Flotilla at St Nazaire, France. Lehmann-Willenbrock took U-96 on eight patrols. His third patrol in February 1942 resulted in seven ships sunk with a total of 49,490 tons. On 25 February 1942 the daily Wehrmachtsbericht announced:

A war corespondent, Sonderführer-Leutnant Lothar-Günther Buchheim, accompanied U-96 on her seventh patrol. Thirty years later he wrote about his experiences on board in a book entitled Das Boot. Lehmann-Willenbrock served as the model for the commander in that book.

He arrived at Bergen, Norway in U-256, where in December 1944 he became commander of the 11th Flotilla, a position he held until the end of the war.

After a year in captivity, Lehmann-Willenbrock returned to Germany in May 1946 and worked with Karl-Friedrich Merten on the salvage of sunken ships in the river Rhine. In 1948 together with three friends he built the sailing ship Magellan. They sailed together to Buenos Aires, Argentina, where they initiated a regatta.

Later he was skipper of several merchant ships. In March 1959 he showed great courage as skipper of the freighter Inga Bastian when he and his crew saved 57 survivors from the burning Brazilian ship Commandante Lyra. In 1969 he became captain of the German nuclear research ship Otto Hahn, a post which he held for more than ten years.

For his outstanding service after the war he was decorated with the Bundes-Verdienstkreuz am Bande (Federal German Merit Cross 2nd class) in 1974. He was chairman of the U-Bootskameradschaft Bremen (U-boat comrades association Bremen) for many years, whose headquarters bear his name to this day. 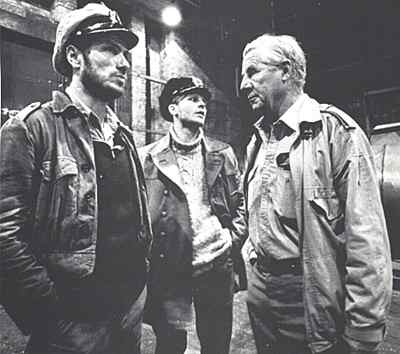 35 years later.
Heinrich Lehmann-Willenbrock on the set with Jürgen Prochnow
who played the commander ("Der Alte") in Das Boot.