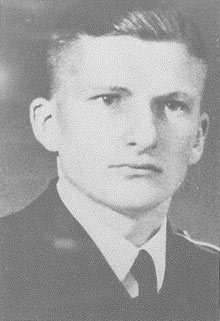 Adolf Piening began his navy career on the famous 'Pocket Battleship' Deutschland, then spent a few years on torpedo boats and minesweepers before transferring to the U-bootwaffe (U-boat arm) in October 1940. Following standard training he made one patrol on U-48 as Kommandantenschüler (commandant in training) in June 1941, and in August took command of U-155. This command was very successful, most notably for the sinking of the British escort carrier HMS Avenger (13,875 tons) on 15 November 1942.

In March 1944 he became leader of the 7th Flotilla. On 30 April 1945 he laid mines outside St. Nazaire in U-255. After the war he spent more than two years in Allied captivity. In 1956 Adolf Piening joined the Bundesmarine, serving for 13 years and retiring as Kapitän zur See.

Piening is famous for the Piening Route, which he devised as a means to escape Allied aircraft in the Bay of Biscay.