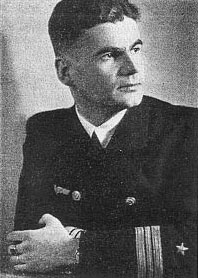 In Oct 1941 Oblt. Günther Reeder was sent to a shipyard in Kiel to go through his U-boat familiarization (Baubelehrung) in preparation for this next command. On 1 Nov 1941 he commissioned the brand new type VIID minelaying U-boat U-214 (Busch & Röll, 1999). His boat was one of only 6 such boats in the war. The next 6 months he spent in the Baltic working up both boat and men.

While outbound through the Bay of Biscay on May 6, 1943 Reeder's boat, the U-214, was heavily depth charged by a British Whitley bomber (10 OTU). Heavy machine-gunfire hit and severely wounded Reeder forcing him to abort his 2 day old patrol and put into Brest on May 10. A replacement captain, Rupperecht Stock, took the boat out again on May 19 (Blair, 1998).

This was to be Reeder's last U-boat command. He then joined the staff of 9th Flotilla in May 1943, serving there until Sept when he became an instructor with the 3rd ULD until the end of the war (Busch & Röll, 1999).