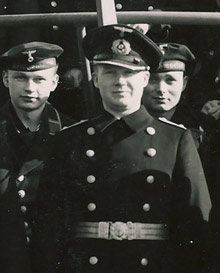 
Otto Kretschmer was born in Heidau über Niesse in Prussian Silesia (now Hajduki Nyskie, Poland), and was the son of a schoolmaster. Prior to joining the Reichsmarine as an officer candidate at the age of 18 he studied English and literature at Exeter University in England for eight months. After officer training he spent three months on the sailing school ship Niobe and more than a year on the light cruiser Emden.

After serving on the pocket battleship Deutschland and the light cruiser Köln 1934-35, he transferred to the U-bootwaffe (U-boat force) in January 1936. He thus received a solid pre-war training as a U-boat officer. He joined U-35 as 1st Watch Officer (IWO) on U-35 in Nov 1936, and commanded her as Kommandant in Vertretung (Commandant substitute) on one patrol in Spanish waters during the Spanish Civil War.

In September 1937 he took over command the small Type II U-23. Following the outbreak of the war he won his first successes on patrols in the North Sea off the English and Scottish east coasts.

In November 1939 he laid nine mines in Moray Firth, Scotland. The first great success for Otto Kretschmer was the sinking of the Danish tanker Danmark (10,517 tons) on 12 January 1940.

Just over a month later he sank the British destroyer HMS Daring (1,375 tons).

He left U-23 in April 1940 and in the same month commissioned U-99. While commanding U-99 Otto Kretschmer became famous for night-time surface attacks against convoys, and it was at this time his motto
"One torpedo ... one ship" was coined. 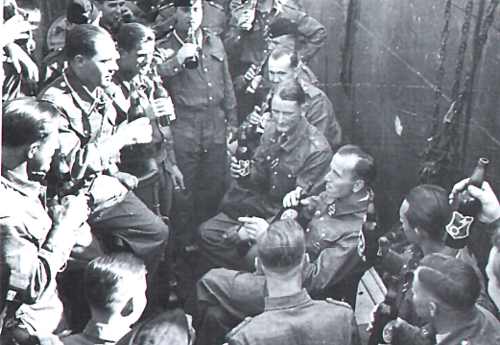 Kptlt. Kretschmer with the crew of U-99 enjoying the first bottle of beer after returning from patrol.

His last patrol also began successfully, but after attacking ten ships, his luck ran out. He was captured after scuttling U-99 at 0343hrs on 17 March 1941 (Schepke was lost in the same action) SE of Iceland following depth charge damage inflicted by the British destroyer HMS Walker (Niestlé, 1998). Kretschmer managed to surface the badly damaged boat and save 40 of his crew before U-99 sank. The LI (Chief Engineer) was one of three men who went down with her.

After his capture he spent more than six and a half years in Allied captivity.
His initial RN interrogation report stated that
"He gave the impression of being a quiet, deliberate man, and looked more like a student than a U-Boat Captain".

For more than four years he was a POW in Canada in Camp 30 (often referred to as Camp Bowmanville), during which time he managed to remain in contact with BdU (U-boat High Command). He returned to Germany in December 1947.

From 1962 he served in several staff positions before becoming Chief of Staff at NATO COMNAVBALTAP (Commander, Allied Naval Forces, Baltic Approaches) in May 1965, a position he held for four years. He retired in September 1970 with the rank of Flotillenadmiral (Admiral of the Fleet).

Otto Kretschmer died in hospital in Bavaria during the summer of 1998 following an accident while on vacation.

You can listen to Silent Otto speaking of his experiences here.