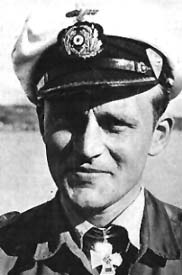 
Leutnant Lange received his first experience as an officer on board the torpedo boat Jaguar. In September 1941 he joined the U-boat arm and only two months later started his first patrol as IWO on U-431 in the Mediterranean. In July 1942 he completed the usual Kommandantenschießlehrgang (commander fire course) in the 24th Flotilla.

Oblt. Hans-Günther Lange commissioned U-711 in September 1942. He commanded eleven patrols on this boat, all in Arctic waters and mainly against British and Soviet convoys. Three times U-711 attacked Soviet radio stations on small islands in the Barents Sea and nearby waters.

On 23 August, 1944 Kptlt. Lange fired torpedoes at the Soviet battleship Archangelsk (former HMS Royal Sovereign and a sister ship to HMS Royal Oak sunk by U-47 at Scapa Flow in Oct 1939) and a Soviet destroyer, but this attack was unsuccessful.

U-711 was sunk on 4 May 1945 by British aircraft (Niestlé, 1998). The next three months Lange spent in British-Norwegian captivity.

In October 1957 Lange joined the Bundesmarine. Here he took part in the construction of a new German U-boat weapon. For two years he commanded the 1. Ubootgeschwader (1st U-boot squadron) and in January 1964 became commander of the entire U-boat force. Later he held several staff positions, ending his second naval career in 1972 as staff officer in the Marinedivision der Nordsee (naval forces in the North Sea).