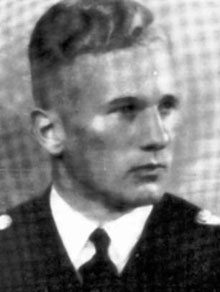 Otto Westphalen began his naval career in October 1938. A year later he took part in the Poland campaign on the school ship Schlesien, and afterwards served six months on the torpedo boat Kondor before joining the U-boat force in October 1940.

In March 1943 he commissioned the type VIIC U-968, which was then detached to the 13th Flotilla (Arctic) Flotilla, where Westphalen became one of the most successful commanders.

He sank two British warships: the sloops HMS Lark and Lapwing. He surrendered U-968 at Narvik in May 1945.

In Jan 1944 Otto Westphalen was empanelled, along with fellow U-boat officer Wolfgang Dittmers, to serve on the court martial of the commander of U-154, Oscar-Heinz Kusch, accused of defeatism and other politically motivated charges by his 1WO, Dr. Ulrich Abel. The prosecutor asked for Kusch to be given ten years imprisonment, but the court imposed the death sentence.

After the war Westphalen and Dittmers tried to defend their actions by stating that Kusch's political views had somehow made his U-boat less effective in the war effort - a questionable view at best. Kusch's fellow officers did nothing to save his life (and neither did Dönitz, who could probably have chosen to prevent the matter going this far, as he did in the case of other U-boat officers who fell foul of the Gestapo). Kusch was executed by firing squad in Kiel on 12 May 1944 (Rust, 2001).


Rust, E. (2001). The Case of Oskar Kusch and the Limits of U-boat Camaraderie in World War II: Reflections on a German Tragedy