British submarines fought a deadly battle with their German counterparts during World War Two. The British submarines succeeded in sinking 12 German U-boats, for the loss of 4 of their own (P-615, Spearfish, Thristle and Doris) to U-boats. Doris was a French submarine on loan and under British command. The submarine Seal was captured in early 1940 and renamed UB by the Germans.

British submarine development between the wars owed much to the versatile E-boats built at he start of the Great War. The most notable types were the H and L-classes that continued in service until well into the Second World War. The L-boats in particular were well liked by their crews and many successful submarine commanders were trained in them.

The nineteen O, P and R class boats were built between 1925 and 1931 had a surface displacement of about 1400 tons, armament of a 4in gun and eight 21" torpedo tubes. They had a surface range up to 20,000 miles. There was a bit of trouble with leaks from external fuel tanks but apart from that they were an excellent design for Pacific warfare.

Unfortunately they were too large and unmanoeuvrable for Mediterranean work and suffered heavy losses when they were deployed there because of a shortage of more suitable boats. (11 were lost out of 15 deployed in the Mediterranean in 1940).

The T class were the designed replacements for the O, P and R class boats. The size (1325 tons) was kept down to allow more hulls to be built within the tonnage restrictions of the London Treaty. In common with the S boats they had a very powerful torpedo armament, carried all their fuel internally and were constantly being improved throughout the war - see photos of each T class subtype below. Boats specifically intended for the Pacific had extra fuel tanks fitted to increase the range.

See more on the T class - including all boats. 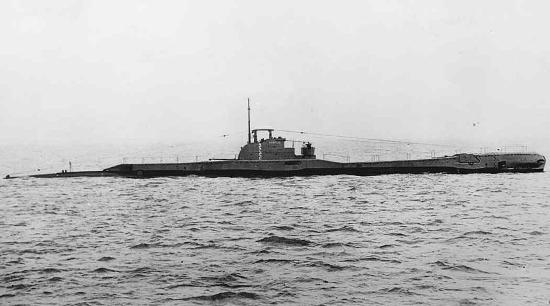 The British submarine HMS Thistle of T class, Group One. She was lost on 10 April 1940 to German U-boat U-4. 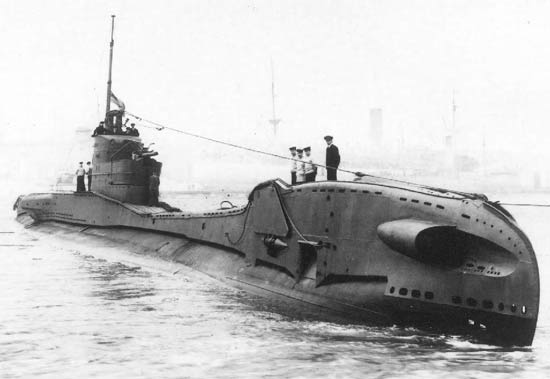 The British submarine HMS Thorn of T class, Group Two. She was lost on 9 Aug 1942.

The A class submarines developed from the T boats and were designed for operations against Japan, but arrived too late for use in the war. However, they, like the surviving T boats, were streamlined and equipped with snort masts. They were to form the backbone of the submarine service until the arrival of the highly successful modern P and O class patrol submarines that started coming into service in 1958. See more on the A class - including all boats.

The U class were originally developed as unarmed training boats to replace the WW1 H-class. They were fitted with torpedo tubes to allow them to be used operationally. Small and manoeuvrable (630 tons) they were well suited to the confined waters of the North Sea and Mediterranean. They were succeeded replaced by the very similar but partially welded V class. Cheap, reliable and quickly produced, these were the workhorses of the wartime Submarine Service. See more on the U class - including all boats. 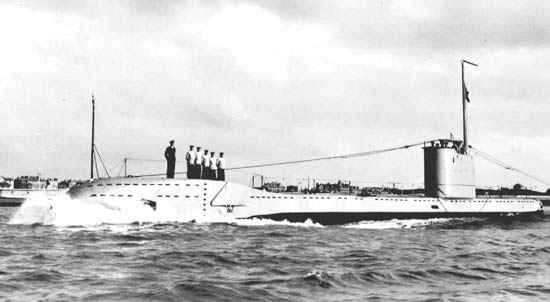 The S class was the new medium sized patrol submarine, designed with the proposed international restriction of 600 tons displacement in mind. Intended for use in North European or Mediterranean waters, they were highly manoeuvrable and fast diving with a heavy armament of torpedoes. This allowed large salvoes to be fired from long range in an effort to counter the improved A/S techniques. This proved to be a very successful design that was put back into production during the war, 62 boats of this class being built. Some boats were partially welded and the later ones fully welded construction, improving the strength of the pressure hull and consequently increasing their diving depth. See more on the S class - including all boats.

These 18 boats were similar to the preceeding U class. They were however able to dive deeper due to partly welded contruction and had more powerful diesel engines. See more on the V class - including all boats. 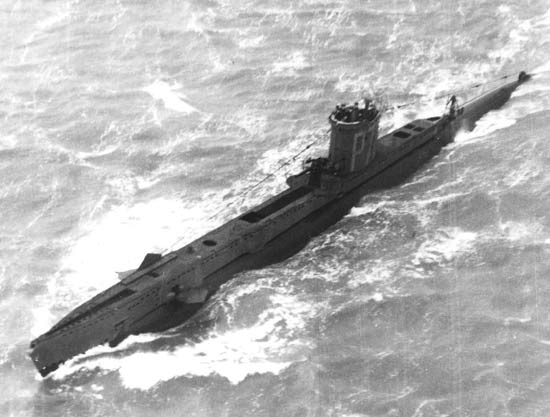 A disastrous flirtation with steam powered submarines between the wars was put aside but an attempt was made to build a diesel fleet submarine with the River / Thames class. Built in the early 1930s their surface speed was not enough to keep up with the fleet and only three were built.

The Porpoise class were also built in the 1930s, They were designed as specialist minelayers but the development of torpedo tube launched mines made this function obsolete. Nevertheless were they were very successful as a class.

The X-craft, midget submarines, were designed originally for use against the German battleship Tirpitz holed up in a Norwegian fjord safe from all normal means of attack. On the 22nd September 1943 two out of six craft broke through the defences and succeeded in crippling the Tirpitz which never put to sea operationally again. Thereafter X-caft struck at other targets including a floating dock and a Japanese cruiser as well as cutting the sea-bed telephone cables that linked Japanese occupied Saigon with Singapore and Hong Kong. They also acted as navigational beacons for amphibious tanks off the Normandy beaches on D-Day.

Return to the Royal Navy page