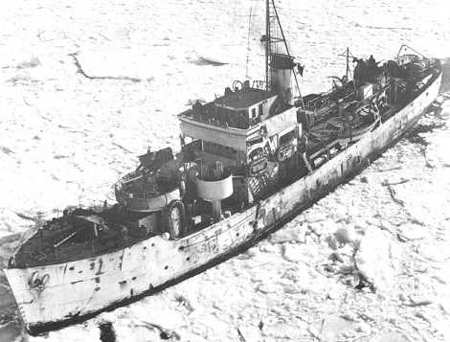 The naval trawler is a concept for expeditiously converting a nation's fishing boats and fishermen to military assets. England used trawlers to maintain control of seaward approaches to major harbors. No one knew these waters as well as local fishermen, and the trawler was the ship type these fishermen understood and could operate effectively without further instruction. The Royal Navy maintained a small inventory of trawlers in peacetime, but requisitioned much larger numbers of civilian trawlers in wartime. The larger and newer trawlers and whalers were converted for antisubmarine use and the older and smaller trawlers were converted to minesweepers.

A single deck gun was mounted on each trawler. Antisubmarine trawlers were usually given a 4" gun approximately equal to the deck guns of the submarines they might encounter. Minesweeping trawlers usually received a 12 pounder, although vintage 3 pounders or 6 pounders were sometimes fitted temporarily until more suitable weapons became available. Trawlers were also given between two and four .303 calibre Lewis guns which were later augmented with a similar number of 20mm machineguns. In a surface battle with a U-boat, the trawler attempted to dissuade the U-boat deck gun crew with machineguns, while the U-boat might similarly aim its 20mm at the trawler's unshielded deck gun.

By May 1940 antisubmarine trawler strength had increased to 9 at Portsmouth, 23 in the Western Approaches, 65 at Rosyth, 19 at The Nore, 12 at Dover, and 25 in the Orkney & Shetlands. The Mediterranean force had increased to 12 and new groups of five were stationed at Gibraltar and in the South Atlantic. Another 20 trawlers were fitting out for antisubmarine service.

Trawlers are eminently seaworthy; so, when convoy escorts were needed after the fall of France, antisubmarine trawlers were pressed into escort service for which they were poorly suited. With maximum speeds of 10 to 12 knots, trawlers were able to maintain screening stations, but unable to maneuver effectively. If a trawler left station to investigate a contact or rescue the crew of a torpedoed ship, hours might pass before the trawler could regain station on the moving convoy. Escorting trawlers might discourage a timid U-boat acting independently, but an aggressive U-boat captain could use the superior surface speed of the U-boat to outmaneuver trawlers.

Successful wolf pack attacks of 1940 -- like the battle of HX-79 -- occured because slow escorts could be distracted to one side of the convoy giving time for a U-boat to approach and attack from another direction.

The Royal Navy classified requisitioned trawlers by manufacturer, although such classes were more diverse than traditional naval classifications:

The trawler BASSET, built in 1935, became the prototype for nearly 250 military trawlers built in the following ten years:

Many of the above listed trawlers were employed for minesweeping rather than antisubmarine work. Antisubmarine trawler distribution in May 1944 included 28 at Portsmouth, 33 in the Western Approaches, 10 at Rosyth, 7 at The Nore, 28 at Plymouth, and 36 in the Orkney & Shetlands. There were 10 trawlers at Gibraltar, 17 in the central Mediterranean, and 13 in the eastern Mediterranean. The South Atlantic force had increased to 22; and there were 12 in Iceland, 8 in the Azores, 13 in West Africa, 19 in South Africa, and 15 in the Indian Ocean.