"The Lord looks out for drunks, little children, and the CVEs"

The escort carriers were considered to be thin-skinned, slow, unstable, and unwanted, but the crews fought these "baby flattops" in every theater of WW II with distinction and valor; none more so than in the Battle of the Atlantic against the U-boats. The American CVE sailors had a wry saying; the CVEs were "...two torpedo ships; the first torpedo would go through you and the second would go over you". Admiral D. V. Gallery USN, summarized the shiphandling and seakeeping abilities of the escort carriers as, "...they were barely good enough; but they were good enough". In spite of the acknowledged shortcomings of the ship design, Samuel Eliot Morison, distinguished Harvard professor and WW II naval historian, said of these ships "...the escort carrier groups were probably the greatest single contribution of the United States Navy to victory over enemy submarines".

USS Guadalcanal CVE-60 was the sixth of the Casablanca class escort carriers built by the Kaiser shipyards in Vancouver on the Columbia River in the state of Washington. Fifty of these ships were built within the period of one year using welded construction and prefabrication mass production techniques. With a large balanced single rudder operating in the race from twin screws, the Casablanca's were highly maneuverable, fast for an escort carrier, but noted for their rolling tendencies which gave operating problems in the heavy seas of the North Atlantic. Of the 50 Casablancas built, only 6 were assigned Atlantic duty.

USS Guadalcanal displaced about 11,000 tons loaded, was twin screw propelled by a pair of 5 cylinder Skinner Uniflow steam engines producing 9,000 shp, and could make approximately 20 knots. A fuel capacity of 2,279 tons was sufficient for ASW patrols of about 3 to 4 weeks at sea without re-fueling (the carrier also re-fueled the screening DEs at sea).

Guadalcanal's flight deck was 477 feet long by 80 feet wide with 2 elevators, one forward and one aft. The arresting gear consisted of 9 wires and 3 barriers. Each hydraulic arresting unit controlled two wires and were located in pairs athwartships directly beneath the flight deck. The ninth wire and barrier #1 were both on the fifth hydraulic unit with barriers #2 and #3 on the sixth unit. Most successful landings were on the 2nd and 3rd wires. Engagements on the 6th wire and beyond were likely to involve contact with the barrier with subsequent damage to the aircraft's propeller as a minimum. An experienced barrier operator would sometimes save a late wire engagement by dropping the #1 barrier if he was sure the plane had engaged a wire. This was a somewhat risky judgment call on the barrier operators part however; the decision to drop the barrier had to be made swiftly and he ran the risk of allowing the landing aircraft to plow into aircraft parked forward of the barriers. But by the same token he could also save an aircraft from damage.

A single compressed-air powered hydraulic catapult was located forward on the port side flight deck. With the ships speed capability it was possible to catapult launch and land both the Wildcats and Avengers in dead calm wind conditions.

Guadalcanal's armament consisted of one 5"-38 caliber gun mounted on the fantail. Sixteen 40mm Bofors AA guns in dual twin mounts were located in the catwalks at the 4 corners of the flight deck. Twenty 20mm single mount Oerlikon AA guns were located along the catwalks, 10 on each side. Each 40mm mount was servoed to its own Sperry gyroscopic sight and gun director located in the catwalk about 10 feet away. Each cluster of 40mm guns could be aimed and fired under the remote control of one man on the gun director. Control could also be shifted to the gunners seated in the mount who aimed with "iron sights". Each 40mm mount was served by two loaders standing on the gun platform and dropping the ammunition in clips of 4 rounds each into the loading hoppers on the top of the gun. The ammunition was handed up from the clipping rooms located on the catwalks.

There is no record of an Atlantic escort carrier firing its guns at a U-boat. However, the northern Atlantic convoys were attacked by German aircraft so there was always the threat of air attack from long range land based aircraft. The situation was quite different in the Pacific where air attack was frequently encountered and heavy anti-aircraft armaments on the carriers were essential.

Guadalcanal operated with composite squadrons of approximately 23 aircraft (this number varied slightly from squadron to squadron), with a mix of Wildcat fighters and Avenger torpedo bombers modified for anti-submarine work. The principal role of the Wildcat during an attack on a U-boat was to suppress AA fire by making strafing runs, enabling the Avenger to get in close enough to fire its rockets, drop depth charges, or release a Fido. The shorter range Wildcats sometimes carried an external wing tank slung from the starboard wing bomb rack to extend their time in the air with the Avengers.

The air squadrons were not assigned permanently to any one carrier. When a carrier was ready to depart on a mission the next up available squadron was assigned for the duration of that particular cruise. Upon return to port, the air squadron was flown off to a naval airstation to await re-assignment to some other departing carrier. As a result, most of the VC squadrons operated off most of the carriers at one time or another. The situation was somewhat similar to the manner in which the DEs were assigned to the Task Groups. The CVEs were not always accompanied by the same destroyer escorts.

All of Guadalcanal's air-division officers, including the commanding officer, were qualified navy pilots detached from flying duty while serving as ships company. However, being flying officers, they were required to retain flying proficiency. Once a year the ships flying officers were put ashore at some convenient naval airstation. Here they picked up an aircraft and flew back to the carrier standing by at sea to take them aboard. They were required to make 8 successful landings and take-offs.

Qualification of the ships officers was always considered somewhat as a sporting event by the crew, with every off-duty hand crowding the catwalks to watch the air show. Wagering between the air division crewmen as to which division had the best pilots was a major feature of the qualifications. The first time Guadalcanal conducted qualifications, the V-1 division officer (V-1 was flight deck operations) shot eight landings in a row without a wave-off; a perfect score in the betting pool. The V-1 division crewmen were contemplating some memorable liberties in Norfolk to be made possible with their winnings when the news came back the pilot had returned to the airstation and landed with his wheels up.

USS Guadalcanal was named in honor of the US Marines 1942 victory on the island of Guadalcanal in the Pacific. The ship was launched on 5 June 1943. During the first week of September 1943, Guadalcanal was towed down river to the commissioning yard at Astoria, Oregon near the mouth of the Columbia River. Here the commissioning crew came aboard. Each man as he reported for duty was handed a memo from the commanding officer:

1. The motto of this ship will be "Can Do", meaning that we will take any tough job that is given to us and run away with it. The tougher the job, the better we'll like it.

2. Before a carrier can do its big job of sinking enemy ships, several hundred small jobs have got to be done and done well. One man falling down on a small job can bitch the works for the whole ship. So learn all you can about your job during this pre-commissioning period. Pretty soon we will be out where it rains bombs and it will be too late to learn.

Note: This ship will be employed on hazardous duty. We will either sink the enemy or get sunk ourselves depending on how well we learn our jobs now and do our jobs later.

ANYONE WHO PREFERS SAFER DUTY SEE ME AND I WILL ARRANGE TO HAVE HIM TRANSFERRED.
D. V. Gallery
Captain, U.S.N.

This memo clearly established the ships mission and the captains expectations. There is no record of any man asking to be transferred and the ship became known in the fleet as the "Can Do".

During the next few days, supplies were loaded and various dockside and engine tests conducted; checkout completed, the ship was ready to put to sea. Whether it could fight was yet to be proven. Captain Gallery, a winner of the Bronze Star for combat operations against the U-boats in 1942 while commanding the naval air base in Reykjavik, was preparing to take his ship into the Atlantic against the battle hardened and tested U-boat men of the Kriegsmarine. Eighty percent of Guadalcanal's crew had never been to sea; the average age of this group was about nineteen. Many had just graduated from highschool and gone straight into the Navy. There was much work to be done and training to be accomplished in a very short period before Guadalcanal would become an effective aircraft-carrier fighting unit. Many of the leading petty officers were experienced veterans of the Pacific war from the carriers USS Lexington and USS Hornet. Much of the responsibility for training and ships operation fell on the shoulders of these older experienced men. 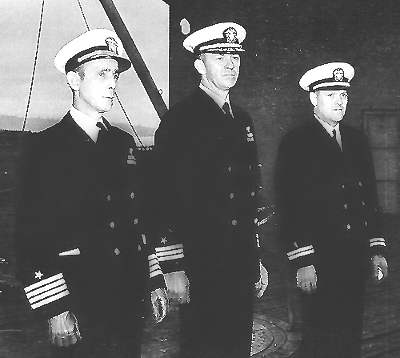 On 25 September 1943, the crew was assembled in dress uniform on the flight deck. Captain Gallery read the ships orders, Chaplain Weldon gave a short prayer, the colors were hoisted, and USS Guadalcanal became a ship of the US Navy.