Destroyer of the Admiralen class 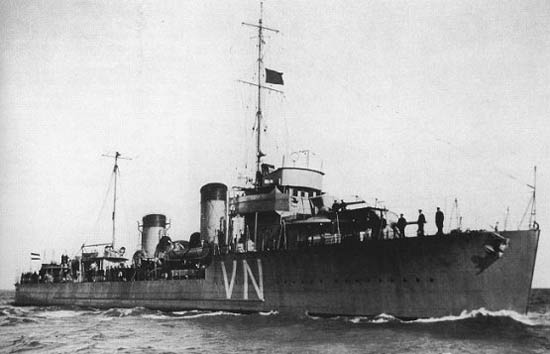 27 Dec 1941
The damaged HrMs K XIII (Lt.Cdr. M.A.J. Derksema, RNN) departs Singapore for Surabaya where she will undergo repairs. As K XIII is unable to dive she is escorted until she is south of Banka Strait by the Australian minesweeper HMAS Bendigo (Lt.Cdr. J.A.R. Patrick, RANR(S)). There the Dutch destroyer HrMs Van Nes (Lt.Cdr. C.A. Lagaay, RNN) takes over the escort. Both ships arrive at Surabaya on 30 December 1941.

Convoy MS 2 arrived at Fremantle on 15 January and departed again in the same composition on the 16th.

On arrival at Lampung Bay, HrMs Java and HMS Thanet parted company to proceed to Batavia to fuel on completion of which they returned to Ratai Bay. HMAS Canberra and HMS Express fuelled at Ratai Bay.

At Lampung Bay the troops from the Aquitania were put onto smaller ships which were to take them to Singapore as Convoy MS 2A.

Around 1045GH, convoy MS 2A departed Ratai Bay for Singapore. It was escorted by HMAS Canberra, HMAS Vampire and HMIS Jumna.

Around 1830GH/21, HrMs Java and HMS Thanet joined from Batavia.

At 1000GH/23, after the convoy had passed the Banka Strait HMAS Canberra parted company leaving HrMs Java in command of the escort. HMAS Canberra then proceeded to Batavia where she arrived the following day.

The convoy arrived at Singapore late in the morning of the 24th. (3)