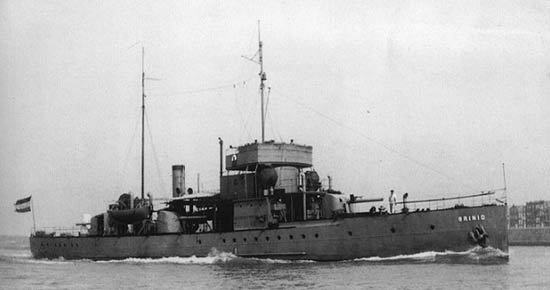 The Gruno class gunboat HNMS Brinio of the Royal Dutch Navy. She was lost on 14 May 1940.

The Dutch Navy at the beginning of the war with Germany in May 1940, consisted of 1 coastal defence ship, 5 cruisers, 9 destroyers, 27 submarines, 4 gun boats, 6 minelayers and other smaller vessels. The Dutch Navy fought in many parts of sea like North Sea, Mediterranean and the Pacific sea where the Dutch navy had to defend the Dutch colonies from the Japanese advance.

Dutch naval forces had a contribution of sinking many enemy vessels, including 2 U-boats and also Japanese and even Italian submarines. But they also suffered many losses during the war, especially their submarine arm. They lost the coastal defence ship Soerabaja, the 3 cruisers De Ruyter, Java and Sumatra, 9 destroyers, 11 submarines and other smaller vessels.

Ships of the Royal Dutch Navy

War losses
According to our files the Royal Dutch Navy lost 59 warships during WWII (40.41%). See them all here.