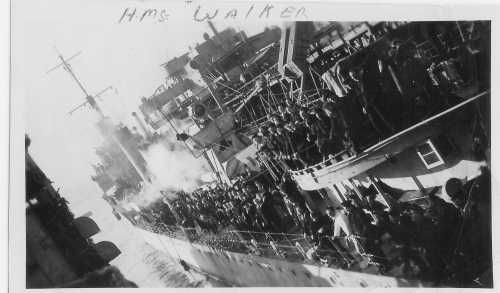 11 Sep 1939
HMS Walker (Cdr. W.J.C. Robertson, RN) and HMS Vanquisher (Lt.Cdr. K.H. Fraser, RN) collide with each other about 200 nautical miles south-west of Cape Clear while escorting convoy OB 2. Both ships were heavily damaged. Vanquisher even had to be towed back to port. Vanquisher was under repair until early January, Walker until mid-November.

They had provided cover for the damaged destroyers HMS Vanquisher (Lt.Cdr. K.H. Fraser, RN) and HMS Walker (Cdr. W.J.C. Robertson, RN) which had collided late on the 11th and were both heavily damaged.

This convoy departed Freetown on 16 January 1940 for the Liverpool where it arrived on 4 February 1940.

Evacuation of troops from the Åndalsnes area during the night of 30 April / 1 May 1940.

They were joined around 1530A/30 by the light cruisers HMS Southampton (Capt. F.W.H. Jeans, CVO, RN) and HMS Sheffield (Capt. C.A.A. Larcom, RN) which had already been at sea.

All forces arrived in the area in the late evening of April 30th.

During the night of 30 April / 1 May, the Ulster Prince with HMS Tartar evacuated troops at Molde. While the light cruisers HMS Galatea, HMS Arethusa and HMS Sheffield evacuated troops at Åndalsnes. The Ulster Monarch was with this force but she did not take on board troops as there was no more time available. The destroyers HMS Sikh and HMS Wanderer evacuated troops from Åfarnes and ferried them to HMS Southampton. While doing so HMS Wanderer grounded and was damaged. She had to be towed off by HMS Sikh.

The destroyers HMS Mashona, HMS Walker and HMS Westcott picked up troops from Veblungsnes just to the south-west of Åndalsnes.

On leaving the Fjords, the ships came under attack from German aircraft but no ship sustained damage.

In the afternoon of May 1st, HMS Southampton, HMS Walker and HMS Westcott arrived at Sollom Voe.

HMS Sheffield arrived at Scapa Flow around 0615A/2.

HMS Galatea arrived at Scapa Flow around 0200A/2.

HMS Arethusa arrived at Scapa Flow around 0230A/2.

HMS Wanderder arrived at Sullom Voe around 0635A/2 after having been delayed by a u-boat hunt.

Around 1235A/2, the Ulster Monarch and Ulster Prince arrived at Scapa Flow escorted by HMS Sikh.

HMS Tartar arrived at Scapa Flow around 2100B/2.

HMS Somali and HMS Mashona apparently remained at sea and took part in the evacuation during the following night. (3)

1 May 1940
HMS Southampton (Capt. F.W.H. Jeans, CVO, RN) took on board troops near Åfarnes, just north of Åndalsnes. The troops were ferried to her by the destroyers HMS Sikh (Cdr. J.A. Giffard, RN) and HMS Wanderer (Cdr. R.F. Morice, RN). However HMS Wanderer grounded and she had to be towed off by HMS Sikh.

HMS Southampton departed from the area around 0220 hours to proceed to the U.K.

The ships were ordered to proceed to Sullom Voe where they arrived early in the evening. HMS Southampton then transferred troops to HMS Westcott which took them Scapa Flow arriving there around 0800/2.

Some of these ships bombarded Narvik very late in the evening following which the final assault by the Allies on Narvik began.

Narvik was captured from the German in the evening of the 28th.

During the 28th multiple ships sustained damage due to German air attacks;

The most serious damage was to AA cruiser HMS Cairo. She was hit by hit by two bombs at 0620/28 and was badly damaged. One bomb struck abaft B gun. It penetrated the deck and exploded among the supply ammunition party. The other bomb hit the starboard .5" anti-aircraft gun mounting. Twelve of the crew were killed.

Light cruiser HMS Southampton was near missed and damaged by bomb splinters. Her Commanding Officer was wounded and two ratings were killed.

AA cruiser HMS Coventry was also near missed and had one rating killed by bomb splinters.

The destroyers HMS Walker, HMS Whirlwind and HMS Havelock all sustained minor damage from near misses. The most serious damage was to Walker. (4)

The convoy arrived at Scapa Flow around 0500/14. It had been attacked by German aircraft on the 9th but no damage was sustained.

The convoy arrived at Liverpool on the 16th minus HMAS Australia which had gone to the Clyde. (5)

At 1820N/14, HMS Milford, HMS Asphodel and HMS Calendula parted company with the convoy to return to Freetown.

HMS Sheffield parted company with the convoy in the afternoon of 1 March 1941 and returned to Gibraltar.

At 1300D/2, the light cruiser HMS Dido (Capt. H.W.U. McCall, RN) joined the convoy escort. HMS Bulolo then parted company with the convoy to proceed to the Clyde.

The Straithaid was unable to sail with the convoy and joined at sea on 21 February 1942.

Between 1300/18 and 1500/18 the transports City of Edinburgh, City of Lincoln and Potaro reported that their cargo had shifted. The Potaro was able to continue but was ordered to proceed to Freetown independently. The other two ships had to return to the U.K.

At 0920/20 the destroyer HMS Anthony left the convoy to proceed to the Azores with condensor trouble.

At 1800/20 HMS Panther was detached to fuel at the Azores and then rejoin the convoy.

At 1300/21 the light cruiser HMS Newcastle (Capt. P.B.R.W. William-Powlett, DSO, RN, flying the flag of Rear-Admiral W.G. Tennant, CB, MVO, RN) and destroyer HMS Paladin (Cdr. A.D. Pugsley, RN) joined the convoy. They had the troopship Strathaird with them. They had departed from the Clyde on 18 February 1942.

At 1600/21 HMS Paladin was detached to the Azores to refuel after which she was to rejoin the convoy.

At 1800/21 HMS Firedrake was detached. She was to return to the U.K independently.

At 1800/22 HMS Verity, HMS Walker and HMS Witherington were detached to the Azores where they were to fuel after which they were to proceed to Halifax.

At 1600/23 HMS Paladin rejoined the convoy. HMS Panther had sailed from the Azores before her but apparently she was unable to find the convoy. Eventually she joined in the evening.

The same ships departed Freetown on 6 March 1942 for South Africa.

Before deparure of the convoy HMS Newcastle conducted gunnery exercises and the A/S escorts conducted an A/S sweep off Freetown returning to meet the convoy off the boom.

At 2100Z/6, HMS Nigella was detached due to engine trouble. After repairs she was to proceed to St. Helena to fuel.

In the morning of 8 March 1942 HMS Newcastle attempted to fuel HMS Bridgewater but owning to the swell this was not possible.

On 9 March 1942 further attempts were made to fuel HMS Bridgewater and some fuel was transferred.

At 1600Z/17, the armed merchant cruiser HMS Dunnottar Castle (Capt.(Retd.) C.T.A. Bunbury, RN) and the sloop HMS Milford (Cdr.(Retd.) the Hon. V.M. Wyndham-Quin, RN) joined the convoy in position 33°13'S, 16°06'E. These ships had departed Capetown at 0520Z/17. Shortly afterwards, the Capetown section, made up of; Bergensfjord, Brisbane Star, Delftdijk, Denbighshire, Nea Hellas, Port Jackson, Potaro, Sibajak, escorted by HMS Newcastle and HMS Milford splít off. The Capetown section arrived there around 0900Z/18. HMS Milford split off shortly before the convoy arrived and proceeded to Simonstown arriving there at 1410Z/18.

The Durban section, made up of the Awatea, Cuba, Duchess of Richmond, Dutchess of York, Empire Pride, Monarch of Bermuda, Mooltan, Ormonde, Strathaird, Stratheden and Volendam continued on now escorted by HMS Dunnotar Castle and HMS Bridgewater.

The Durban section of the convoy arrived off Durban at 0800Z/21. The transports then entered harbour. HMS Cheshire and HMS Dunnotar Castle did not enter the harbour but set course to return to Capetown.

The sloop HMS Milford departed Simonstown at 0500Z on 22 April 1942 to make rendezvous with the Capetown position of the convoy in Table Bay at 1000Z/22.

On departure the convoy was also briefly escorted by HMS Jasmine and HMS Fritillary. These corvettes returned to Capetown at 1150Z/22.

At 0800Z/22, HMS Newcastle departed from Simonstown to make rendezvous with the Capetown section of the convoy.

At 1330Z/25, the Capetown section made rendezvous in position 33°30'S, 31°22'E with the Durban section of the convoy, now made up of the Awatea, Duchess of Richmond, Duchess of York, Empire Pride, Stratheden and Volendam, which had departed Durban at 1000Z/25 escorted by the light cruiser HMS Glasgow (Capt. H. Hickling, RN) and the armed merchant cruiser HMS Worcestershire (A/Capt.(Retd.) E.H. Hopkinson, RN). HMS Milford by that time was no longer with the convoy as she arrived at Simonstown at 1300Z/26. HMS Newcastle parted company with the convoy at 2200Z/25 in position 30°03'S, 33°08'E and proceeded to Durban for repairs arriving there at 0548Z/26.

The remainder of the convoy continued on to Bombay escorted by HMS Alaunia and HMS HMS Worcestershire. It arrived at Bombay on 8 April 1942. (10)