Destroyer of the Wicher class 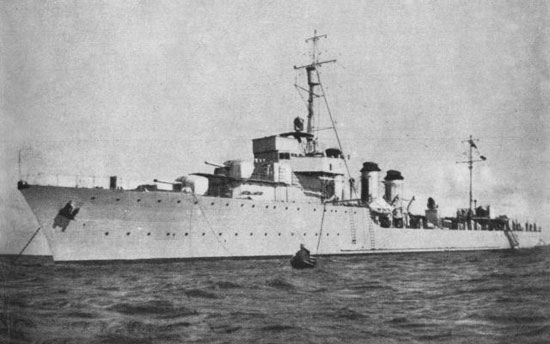 Wicher (Komandor Podporucznik Stefan de Walden) was escorting the minelayer Gryf off Hela. The Polish vessels were attacked by a group of Ju-87 (Stuka) dive bombers from Lehrgerschwader 1. During the attacks, Gryf suffered some damage from near misses. Some of the attacking German aircraft were also damaged, but none was shot down.

In the afternoon Wicher was ordered to cover the mine laying Operation Rurka conducted by Gryf. The operation was cancelled, but nobody informed the commanding officer of Wicher about this fact. At 22.00hours the Polish destroyer spotted two German destroyers(most likely the Richard Beitzen and Georg Thiele) at distance of about 4500 meters. There was excellent opportunity for gun or torpedo attack but the Wicher didn't open fire, because she was ordered to attack only when the enemy spots the Gryf (which stayed in harbour!). A few minutes later another German ship appeared this one wasn't attacked too. It was most likely another German destroyer. Wicher's crew claimed her as cruiser, but this was impossible, because German cruisers were positioned in a different area.

2 Sep 1939
Wicher shot down an enemy aircraft which was trying to attack a fishing vessel. (1)