Light cruiser of the D class 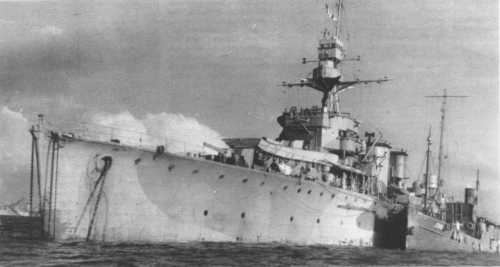 At 0505B/9, HMS Rodney weighted anchor and got underway. She dropped anchor closer inshore at 0618B/9.

At 0903B/9, she opened fire with her port 6" battery. [unknown when fire was ceased.] The target had been a German troop concentration.

at 1102B/9, the port 6" battery again opened fire on a German troop concentration. [unknown when fire was ceased.]

At 1610B/9, HMS Rodney got underway only to drop anchor again 6 minutes later.

At 1657B/9, HMS Rodney weighted anchor again and got underway. Shorty afterwards she engaged German fighter aircraft with her AA guns.

At 1807B/9, HMS Rodney set course to departed the bombardment area for Milford Haven together with ORP Dragon (Cdr. S.T. Dzienisiewicz). They were escorted by the escort destroyer HMS Bleasdale (Cdr. H.M.S. Mundy, RN) and the frigate Riou (Lt. F.L. Boyer, RN). They arrived at Milford Haven to re-ammunition around 1600B/10. (4)