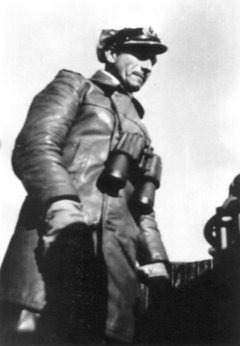 
Helmut Rosenbaum joined the Navy in August 1932. After some months on the light cruisers Königsberg and Nürnberg, in February 1937 he transferred to the U-boat force, where he completed the thorough pre-war training programme. He then served as watch officer on several U-boats before taking command of the small type IIB U-boat coastal boat U-2 in February 1939. He left the boat after two patrols, and two months later commissioned the larger type VIIB U-boat U-73.

After five patrols in the North Atlantic, Helmut Rosenbaum managed to break through the Straights of Gibraltar to the Mediterranean on 14 January 1942. There he scored his greatest victory when he sank the British aircraft carrier HMS Eagle on 11 August 1942. He received the Knights Cross the day after.

He left U-73 in October 1942 to become commander of the 30th Flotilla, which operated in the Black Sea. Helmut Rosenbaum was killed in an air crash on 10 May 1944.