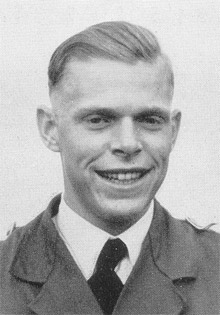 
Klaus Scholtz began his naval career in 1927 and spent most of his time before war began on torpedo boats (G-8, G-11 and Jaguar). He was Jaguar’s commanding officer from June 1937 to April 1939.

In April 1940 he transferred to the U-boat force. After only four months of training he commissioned U-108, a large type IXB boat. On his first patrol in February 1941 he sank two ships with a total of 8,078 tons.

His second patrol was very successful: in April 1941 he sank the British armed merchant cruiser AMC Rajputana (16,644 tons) in the Straits of Denmark.

This dramatic chase is described in the following radio message sent by U-108:

The BdU answered a half hour later:

Well done. Express acknowledgment to commander and crew. Return to base. Dönitz.

On the next three patrols Scholtz led U-108 against convoys in the Atlantic. In January 1942 she left Lorient to join the second wave of U-boats attacking shipping off the US east coast in the follow-up to Operation Paukenschlag (Drumbeat). There Scholtz sank five ships with a total of 20,082 tons.

His last two patrols in US and Caribbean waters were also successful. In October 1942 Klaus Scholtz left U-108 to command the 12th Flotilla based at Bordeaux.

This flotilla included most of the long-range type IX boats, which operated in the South Atlantic and the Indian Ocean. During August 1944 most of the boats left the base for Flensburg. The flotilla's history ended in August 1944 when it was dissolved. The remaining men (some 220) under Fregkpt. Klaus Scholtz attempted to march overland back to Germany. They left Bordeaux on 26 August 1944 but were captured on 11 September by American forces in Beaujancie/Loire (France). Klaus Scholtz then spent the next 18 months in US captivity.

After the war he served from 1953 to 1956 in the naval arm of the Bundesgrenzschutz (Federal Frontier Guard), then transferred to the Bundesmarine (Federal German Navy). He commanded several naval bases, including Kiel, Cuxhaven and Wilhelmshaven. In 1966 he retired with the rank of Kapitän zur See.