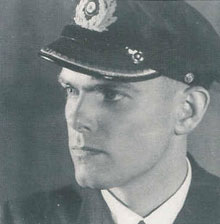 Paul Büchel joined the Reichsmarine in 1925. After seeing service (but not combat) in the Spanish Civil War, he underwent U-boat training, and took command of the type VIIA U-32 in August 1937.

During his second patrol in U-32, mine-laying in the Bristol Channel, Büchel sank two vessels with torpedoes, and two large freighters were damaged by mines U-32 had laid.

For the third patrol, Büchel's mission was to lay mines in the hazardous and well-defended waters of the Firth of Clyde, but he set them in deeper water outside the Firth, where they found no victims. The eight mines U-32 was carrying were the new and more powerful TCM model, and it was hoped they would sink a capital ship (Blair, 1996). BdU Dönitz was unimpressed by Büchel's performance of his duty. He noted that the explanation from the commander had been "unconvincing" and that the mission had been "a difficult one - too difficult for this commanding officer" (BdU War diary).

Krvtkpt. Büchel was relieved of his command on 11 Feb 1940, and subsequently served in several staff positions with training units before being given a boat again, the larger long range U-860, in August 1943. On 15 June 1944, 66 days into his first patrol, en route to the Far East as a Monsun boat, the boat was sunk by aircraft from the escort carrier USS Solomons. Büchel and 19 of his men survived, but 42 died.