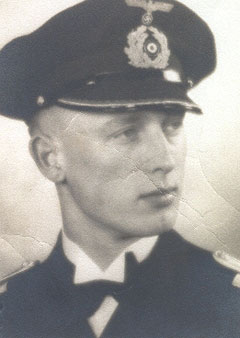 On 17 Sept 1939 Hans Cohausz took command of U A, designed and built for the Turkish navy as Batiray, but taken over by Germany on the eve of war. He commanded the boat until 31 Oct 1940, taking her on two patrols (92 days at sea) and sinking six merchant ships, total 26,756 GRT, and the Armed Merchant Cruiser HMS Andania of 13,950 GRT.

From 1 Nov 1940 to 14 Feb 1942 Kapitänleutnant Cohausz commanded the 1st Flotilla, first at Kiel, Germany and then Brest, France. He commanded the UA again from Feb to May 1942. On his second stint with the boat he went on two patrols, but sank no ships.

From 15 May 1942 to 19 Dec 1944 Korvettenkapitän Cohausz commanded the 11th Flotilla at Bergen, Norway. He then went to serve at the Torpedo School at Mürwik until the end of the war. He was briefly detained by the Allies, being released on 25 Aug 1945.