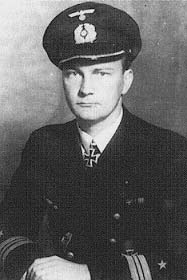 Heinz-Wilhelm Eck was born in Hamburg on March 27 1916, and was raised in Berlin. He joined the Kriegsmarine in April 1943 as part of Crew 34. After completing his training in 1937 he spent five years on minesweepers, commanding one from 1939.

In 1942 he volunteered for the U-boat force and was accepted for training at Pillau on 8 June 1942. His commander-in-training patrol was aboard the famous U-124, commanded by his classmate Johann Mohr, from 28 October 1942 to 21 February 1943.

On June 15 Eck took command of the new type IXD U-852 and put the boat through months of training before leaving from Kiel for the Indian Ocean. Before departure he got a final briefing from experienced commanders like Schnee and Moehle, who warned him that his class of U-boat was among the slowest, heaviest and easiest to hit in the German fleet. He was told to be very careful in the South Atlantic and that wreckage from sunken ships could remain visible to the extensive air cover there for several days after sinkings. That he took these warnings all too seriously was revealed by his behaviour on 13 March 1944, when he ordered the wreckage of the Greek ship Peleus to be machine-gunned after sinking her, despite the fact that some of the survivors of the sinking were floating amongst it. This killed some of those in the water, and was in any case seen to have been unsuccessful in disposing of the wreckage when the boat left to continue patrol.

U-852 was scuttled on the coast of Somalia on 3 May 1944 after running aground during an air attack. The crew was captured the day after by a British landing party. The British retrieved the ship's log (KTB), which Eck had failed to destroy, and from it learned of what became known as the Peleus affair. Eck and his officers were tried as war criminals. Three were sentenced to death, but another two were acquitted and later released.

On 30 Nov. 1945 Heinz-Wilhelm Eck was executed in Hamburg with two of his officers, August Hoffmann and Walter Weispfennig, for his role in the Peleus affair.