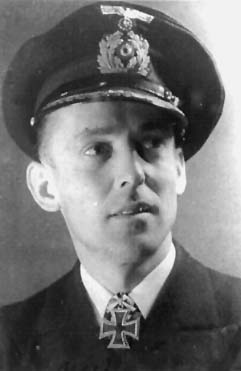 
Carl Emmermann began his naval career in 1934. For some years he was training officer on the Marineschule Mürwik, where future officers got their training. In 1939 he joined the U-boat force and in November 1940 became the I WO on U-A (built for Turkey) under the command of Hans Eckermann. On her first patrol U-A only damaged the British steamer Empire Attendant of 7,524 tons.

In November 1941 Emmermann took over his own boat, U-172. He completed five patrols with this boat, in the Caribbean, with the wolfpack Eisbär in South African waters, and in the North and South Atlantic.

His greatest success was the sinking of the British liner-troopship Orcades of 23,456 tons. His fifth patrol with U-172 was dramatic, in that the boat brought back half the crew of U-604 which had been so heavily damaged during two air attacks that she had to be scuttled.

After that patrol Emmermann became the commander of the 6th Flotilla in St. Nazaire, France in November of 1943.

In August 1944 Emmermann became the chief of the "Erprobungsgruppe Typ XXIII". There in late 1944 he wrote the battle instructions for the new Elektro Boat type type XXIII Elektro U-boat. In March 1945 he was commander of U-3037 for one month, and in the last month of the war he commanded the 31st (Training) Flotilla in Hamburg. Along with some other U-boat men he took part in infantry duty around Hamburg as Commander of "Marine-Batallion Emmermann".