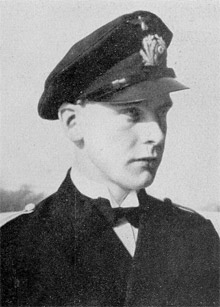 Oblt. Hasenschar then joined the crew of the newly commissioned U-751 (Bigalk), leaving it to begin U-boat Commander training with the 24th (Training) Flotilla. On 15 Sept 1941 he took over command of the veteran type VIIA boat U-29 (Busch & Röll, 1999), famous for sinking the British aircraft carrier HMS Courageous (50) at the start of the war. Hasenschar spent that winter in the Baltic learning how to handle the boat in preparation for active service, giving him extensive experience - over 90 days at sea - before his next command.