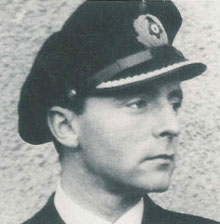 
'Jochen' Mohr was one of a handful of U-boat officers who spent their entire U-boat careers on a single boat. He completed his first three patrols on U-124 under the command of Kapitänleutnant Georg-Wilhelm Schulz before taking her over on 8 Sep 1941.

Mohr achieved notable success against enemy warships. On his first patrol as commander in November 1941, he sank the British light cruiser HMS Dunedin and in 1942 the French corvette Mimosa. The night of 12 May 1942 was also notable: U-124 sank four ships with a total of 21,784 tons from convoy ONS 92. In all, he sank 29 ships in his 18 months as commander of U-124.

A doggerel composed by Mohr on his way back from the US East Coast:

The moon night is as black as ink
Off Hatteras the tankers sink
While sadly Roosevelt counts the score
some fifty thousand tons. Mohr

Mohr was killed when U-124 was sunk with all hands on 2 April 1943 west of Oporto, Portugal by the British corvette HMS Stonecrop and the British sloop HMS Black Swan. (Niestlé, 1998).