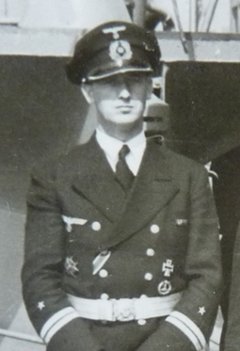 Wolfgang Lüth began his naval career in April 1933 after studying law for three semesters. In the summer of 1933 he spent the traditional three months on the sailing school ship Gorch Fock and then went on a nine month training voyage around the world (India, Indonesia, Australia, North and South America) on the light cruiser Karlsruhe. After a year on the light cruiser Königsberg he transferred to the U-boat force in February 1937.

In July 1937 he became II WO (2nd Watch Officer) on U-27 and made one patrol in Spanish waters during the Spanish Civil War. In October 1937 he became I WO on U-38 under Kptlt. Heinrich Liebe and was on patrol in September 1939 when the war began.

After a short time on a school boat he took over the small type IIB U-boat U-9. During six patrols on this boat he achieved his first successes, most notably the sinking of the French submarine Doris in May 1940.

A month later Oberleutnant Lüth commissioned the type IID U-boat U-138. During the night of 20/21 September 1940, on his first patrol in the new boat, he sank four ships with a total of 34,633 tons - a great coup for a small coastal type U-boat.

In October 1940, after returning from his second patrol, on which he sank one ship and damaged another, he received the Knights Cross, the only commander of a coastal type U-boat to win that decoration.

In September 1942 Kptlt. Lüth left Kiel for his first patrol in this boat. The operational area included the Indian Ocean as well as South African waters. He reached Capetown, South Africa at the end of October, and during the next two weeks sank four ships with a total of 21,987 tons. On 16 November he received a radio message announcing he had received the Oak Leaves to his Knights Cross. Before returning to base he sank eight more ships in the following two weeks, totalling 36,394 tons, arriving at Bordeaux in January 1943.

In March 1943 Kptlt. Lüth left Bordeaux for another patrol in African waters and the Indian Ocean. This patrol, under difficult conditions, was also very successful, with ten ships sunk totalling 45,331 tons. During this patrol Lüth became the first U-boat officer to receive the Knights Cross with Oak Leaves, Swords and Diamonds.

This patrol was also outstanding because it was the second longest patrol of the war, lasting 205 days, second only to Kentrat's incredible 225 days on U-196.

To maintain morale during this patrol Lüth pioneered various ideas, such as publishing a ship's newspaper, holding contests of various types, and other activities designed to keep the crew mentally and physically fit.

He spoke on this topic during a conference of Navy staff officers in Weimar on 17 December 1943, providing a fascinating description of the psychological problems which could arise due to the extreme length of such a patrol. (The entire text appears in Tarrant's The U-Boat Offensive 1939 - 1945.) 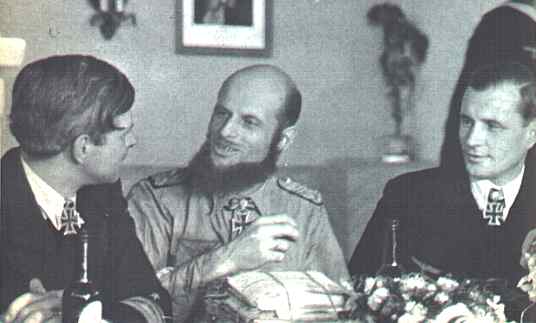 Korvkpt. Lüth after his 205 day patrol with the FdU West Kapitän z. S. Rösing (left)
and the commander of the 12th Flotilla Fregkpt. Klaus Scholtz (right).

In January 1944, after more than five years of uninterrupted duty on U-boats, the highly-decorated Korvettenkapitän Lüth took command of the 22nd (Training) Flotilla which trained future U-boat captains.

In July 1944 he took command of I. Abteilung (1st section) at the Marineschule Flensburg-Mürwik (Naval academy), where future Kriegsmarine officers were instructed, and in September 1944 became the youngest ever commander of the Marineschule.

Only a few days after the war ended, he died in a tragic accident. On 13 May 1945 Kapitän zur See Wolfgang Lüth was shot by a sentry at the Marineschule when he failed to identify himself or give the password. The unlucky shot, fired by the sentry at a target he could not even see in the darkness, struck Lüth in the head, killing him instantly.

There has been much speculation as to why he did not respond to the sentry's challenge. Some have suggested it was deliberate suicide, others that Lüth responded but the sentry failed to hear him. The most likely explanation is that he was drunk, exhausted, or otherwise distracted as he made his way across the grounds of the Marineschule shortly after midnight on the fourth day after Germany's surrender.

Lüth was one of the most controversial of all U-boat commanders, first and foremost because he publicly advertised his firm belief in the tenets of Nazism. But other aspects of his personality, and even his successes, have also found their detractors. Although he sank a huge tonnage of vessels, his successes occurred mostly in African waters and in the Indian Ocean, areas which offered relatively easy pickings with light defences compared to the the North Atlantic. Some of his contemporaries found his ideas on crew management naïve and even laughable; commanders who endured frequent and deadly attacks from the aircraft and escort vessels that dogged them in northern waters found little to relate to in the problem of needing to keep crews amused during monotonous patrols. Buchheim's Das Boot ridicules Lüth's famous lecture on "Problems of Leadership in a Submarine" (although the lecture actually occurred two years after the events in the book were supposed to have taken place, it is clear who Buchheim means when he pokes fun at a long text from "a speech by Lieutenant-Commander L.").

Lüth's paternalistic attitude toward his crew was also well-known; not only did he believe it was his duty as a leader to be concerned with the well-being of his men even after they had left his boat, he also controlled their personal habits as much as possible. All reading materials brought on board had to gain Lüth's personal approval, and pinup posters were forbidden, part of a campaign to stamp out "sexual problems on board". He actively promoted his theories about the proper way to maintain physical health on patrol, going so far as to require certain items of clothing to be worn, and forbidding or closely regulating the consumption of cigarettes and certain foods and drinks. However, Lüth's style of leadership seems to have evoked lifelong loyalty among the majority of his crewmen, who revere him to this day. He also continued to assist his men in their personal affairs and careers after he left U-181, taking time from his busy administrative schedule to respond to their requests for help.

He was clearly a charismatic leader of men, similar in this respect to Großadmiral Dönitz, who stated after the war that Lüth had been earmarked for the position of BdU. However, because of his political leanings, had Lüth survived he would have undoubtedly served a long term in Allied captivity and may even have been barred from serving in any position of authority after his release.

Two days after his death Lüth received the last state funeral of the Third Reich. Six U-boat officers decorated with the Knights Cross formed the honour guard, and Dönitz spoke the last words. A memorial stone at Marineschule Mürwik still honours the memory of this outstanding U-boat officer today.