Destroyer of the E class 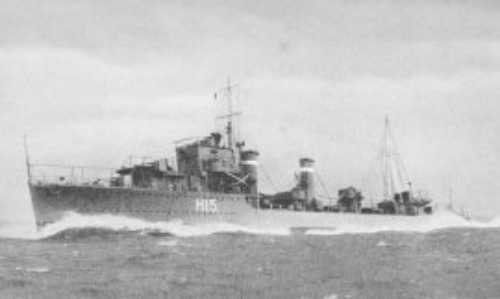 All forces returned to their port of departure on 23 September but not before HMS Hood reported an explosion at 1330/23. The destroyers HMS Firedrake and HMS Fortune were detached to investigate but no contact was obtained. In fact this was indeed an attack by a German submarine; U-24 which reported to have made a failed torpedo attack at 1328/23 on HMS Hood and two escorting destroyers.

31 Aug 1940
On 31 August 1940, a group of destroyers sailed from Immingham on a mine laying mission to the north of the Dutch island of Vlieland.

At 2250/31, aerial reconnaissance reported a large number of German ships to the north of the Dutch island of Terschelling proceeding westwards. The destroyers of the 20th Destroyer Flotilla were ordered to jettison their mines and intercept, believing wrongly that the German ships were part of an invasion force.

HMS Jupiter, HMS Kelvin and HMS Vortiger were behind the minelaying destroyers providing cover for the operation. HMS Jupiter and HMS Kelvin went to the aid of the damaged destroyers while HMS Vortigern remained behind to mark the gap in the minefield for their return.

The escort destroyers, HMS Garth (Lt.Cdr. E.H. Dyke, RN) and HMS Hambledon (Cdr. S.H. Carlill, RN), which were on patrol off the coast near Harwich were also ordered to assist.

Around 0800/1, most of the crew of HMS Ivanhoe abandoned ship and boarded MTB 14, MTB 16, MTB 17. Thirty of the crew remained onboard trying to save the ship.

At 0941/1, HMS Express was taken in tow by HMS Kelvin, but when the towing line fouled HMS Kelvin'spropeller the tow was taken over by HMS Jupiter until it was passed over to the tug HMS St. Cyrus. Close cover for the towing group was provided by HMS Vortigern and HMS Hambledon. HMS Jupiter and HMS Kelvin formed a strike group in case German warships would arrive on the scene. HMS Express was towed to Hull where she arrived on 2 September 1940 and was out of action for around a year.

At 1415/1, the remaining crew of HMS Ivanhoe had to board MTB 15 as HMS Ivanhoe was rapidly sinking.

Later that afternoon a British aircraft reported that HMS Ivanhoe was still afloat. HMS Kelvin, HMS Garth and MTB 30 were ordered to search for her. At 1619/1, HMS Garth spotted HMS Ivanhoe while it was being attacked by a German aircraft. HMS Kelvin also arrived on the scene and she sank the wreck of HMS Ivanhoe at 1700/1 with a torpedo.

Meanwhile the light cruisers HMS Aurora (Capt. L.H.K. Hamilton, DSO, RN) and HMS Galatea (Capt. B.B. Schofield, RN) had departed the Humber to make rendez-vous with HMS Jupiter, HMS Kelvin and HMS Vortigern after the minelaying mission. As the minelaying mission was cancelled they returned to Immingham and while doing so HMS Galatea struck a mine off the Cleaner Shoal Buoy near the Humber light vessel. Damage was hoever only minor.