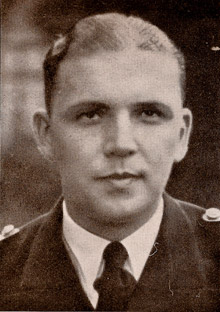 Freiherr von Tiesenhausen began his U-boat career in December 1939 on U-23, commanded by Kapitänleutnant Otto Kretschmer. Together they completed three successful patrols and sank five ships with a total of 27,000 tons, as well as one destroyer.

After his fourth patrol on U-23, under Commander Beduhn, he transferred to the new U-93 (Kapitänleutnant Klaus Korth).

In April 1941 Freiherr von Tiesenhausen took command of U-331. He led the boat on nine patrols, and on 25 November, 1941 he scored his greatest success by sinking the British battleship HMS Barham.

He spent time as a prisoner, first in England and then for three years in Canada. In 1947 he returned to Germany and worked as a joiner. During the autumn of 1951 he left Germany and went back to Canada. He lived in the Vancouver area for the rest of his life, working as an interior designer, and achieving some distinction as a nature photographer.