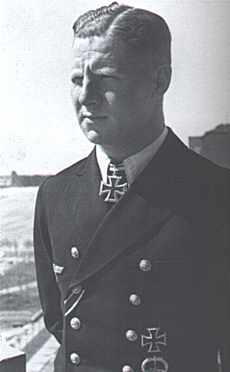 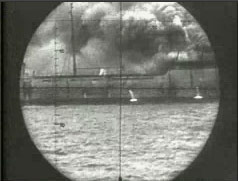 We introduce to you a filmed report on board a German submarine on a cruising in the Atlantic commanded by the Kapitänleutnant Endrass.

A smoke at the horizon: action stations.
The diesels are stopped.
The electric motors now will carry out the progress of the submarine in diving.
The automatic camera is fixed on the conning tower.
The submarine submerges.
The periscope makes it possible to recognize suspect smoke: It is from an armed English merchant ship.
The boat surfaces again.
We open fire on the cargo boat.
The enemy ship counter-attacks.
The merchant ship sinks.
The course continues towards the North-West.
Alarm! A British convoy is announced.
In diving, all the crew must take his station of combat.
Several units of war escort the merchant ships.
The submarine goes in position of shooting. The torpedo is prepared for action.
Hit!


And during days and days, increasing the figure of sink enemy tonnage, the submarine continues its hard mission.