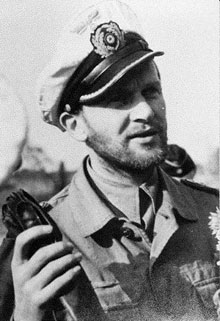 The name comes from the inventor, Richard Mohr (in German 'Mohr' is an old fashioned 'polite' term for negro). The first of these 2,75 ton vessels entered service in March 1944 and about 200 of them were built in 1944. They could travel for 48 miles at 4 knots awash and carried one torpedo.

These boats were used against the allied invasion fleet off Normandy during two occasions before the allied breakout on land forced them to be relocated out of range of Normandy in early July 1944. The 40-strong Neger flotilla operated from Favrol Woods (west of Honfleur) and on 5 July 26 of them attacked the invasion fleet but of the 24 who attempted an atttack only 9 survived, having sunk 2 small British minesweepers, the HMS Magic and HMS Cato.

The second attack was on the night of July 7/8 was carried out by 21 Neger boats, as the night was clear and moonlit and the boats sailed awash all of them were spotted and destroyed both by aircraft and A/S vessels. This attack resulted in the sinking of the minesweeper HMS Pylades and the damaging of the Free Polish cruiser Dragon which was later scuttled to form the Goodeberry breakwater of Normandy.