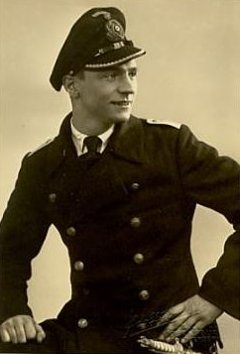 When Kptlt. Wilhelm Kiesewetter took command of the boat in 1940 he became the oldest serving U-boat commander in the Kriegsmarine, then 62 years old.

The boat was originally commissioned into Norwegian service on 1 Oct, 1929. Speed was 15 knots on the surface and 8.9 knots underwater. Armament was in the form of 1 7.6" deck gun and 4 torpedoes carried on board. They had a crew of 23.

Another Norwegian U-boat was captured at Kristiansand in April 1940. This was the B-2 that was captured with B-5 (UC-1). The B-2 was unable to dive and the German flag was hoisted on it and its Norwegian crew allowed to leave the boat. What happened after that is unknown.

The series B-1 to B-6 were built as a result of payment from the British Government for two Norwegian coastal defence ships seized nearly finished at the builders in 1914. They were not laid down during the Great War as stated in the Gr—ner books. Due to severe difficulties to get steel and equipment the construction took a lot of time, but not 15 years (about 3 years for the first ones) The B-1 was launced in 1922.